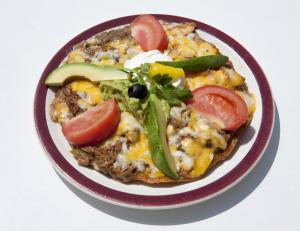 “It’s popular because you taste lots of our Mexican flavors,” said Manager Lino Rodarte. The Cheese Crisp Special originated at Casa de Pico, which has since relocated to La Mesa’s Grossmont Center. It can also be found at all Powers’ restaurants – Casa Guadalajara in Old Town, Casa de Bandini in Carlsbad, and Casa Sol y Mar in Del Mar Highlands.

Heat oil to 425 degrees in a frying pan.

Top with cheese and heat until cheese melts.

Preparation: Cook all ingredients together for about 1 hour.

Preparation: Cook ingredients together for about 1 hour. Shred beef with fork.

Salt and garlic powder to taste

Preparation: Mash together peeled avocados; add all other ingredients, mix well and chill.