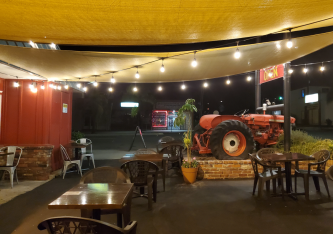 Photo, left:  Terra American Bistro, a farm to table eatery in San Diego just west of La Mesa, had moved outdoors but is now back to offering take-out taco Tuesdays and to-go Christmas dinners, among other offerings, as a result of the latest shutdown order.

December 19, 2020 (San Diego) – Beleaguered restaurant owners are once again ordered to shut down, after three justices on the Fourth District Court of Appeals on Friday issued a stay blocking an order issued Wednesday by Superior Court Judge Wohlfiel.  The Appeals Court, responding to an appeal filed by California’s Attorney General, found that Wohlfiel acted too broadly in expanding an order in a case filed by strip clubs to also include restaurants, which were not parties in the case.

The state argued that Wohlfiel’s order jeopardized the health of county residents by undermining public health orders aimed at curtailing spread of the disease at a time when the Southern California intensitve care units are full, with zero percent capacity.

Wohfiel has issued a temporary injunction prohibiting the state and county from enforcing COVID-19 shutdown orders at restaurants and strip clubs.  Many local restaurants swiftly responded by reopening for outdoor and in some cases, indoor dining.  But the reprieve proved short-lived; the Appeals Court action means that restaurants are once again ordered to shut down except for take-out and delivery services.