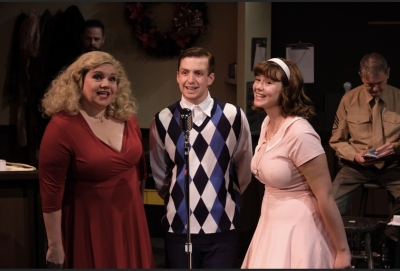 November 28, 2021 (La Mesa) - Once upon a time, before scrolling through your social media feed, before television, in a simpler time, there was radio--with only a couple of options to choose from. But the family came together and listened. Lamplighter's theatre presents "The 1940s Radio Hour," a musical by Walton Jones touching on the nostalgia of the era. The play is a soothing and peaceful interlude among the chaos of the holiday season’s hustle and bustle.

The setting is a radio studio with three standing microphones, stools for the castand a two-person band behind them along with an open office foyer off to the side. It’s the seedy studio of WOV, a 5,000-watt local New York radio station, about an hour before a Monday night broadcast of a weekly variety show, "The Mutual Manhattan Variety Cavalcade” on December 21, 1942. 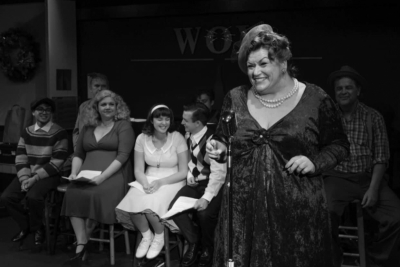 This is a show with a little story, mostly driven by the 14 characters and the quirks that bring them to life for us to enjoy. I had two favorite characters in the show. Pops, the old-timer in the front office, takes bets on horses between calls; he’s a loveable old coot played by O.P. Hadlock. My other favorite, Wally, the fan boy delivery person, knows everything about the show and dreams of being part of it. He’s played by Daniel Savala, who brings a freshness to the show. Other characters include DanielI Hall playing Clifton, the man in charge of the show, Olivia Torres as Ann, what I would call a torch singer and Rob Johnston playing Johnny, the bad boy lead.

Lizette Kent Allen portrays Ginger. Her name says it all--a woman with spunk. I loved when she broke out the trombone. Kara Tuckfield plays the matronly Geneva. We loved her tilted blue hat. She brings color to the set. Jeff Jones plays Neal, kind of a back up singer, has plenty of personality of his own. Then we have the clean-cut kids, Biff and Connie, played by Kyler Waitley and Dani Ucman. Rounding out the cast are Lee Price, Benjamin Read and Ryan Morrison. Pamela Stromply & George Bailey rock the directing to send us back into another era.

Christmas is a time for bonding and this is the perfect show to bring out your older relatives or friends and let them relive their memories as they tell you what life was like back then, with songs like "Old Black Magic," "A Tisket a Tasket," and "Boogie Woogie Bugle Boy." I went with my 81-year-old mom; she loved the show. It brought back memories of her mom --priceless moments. 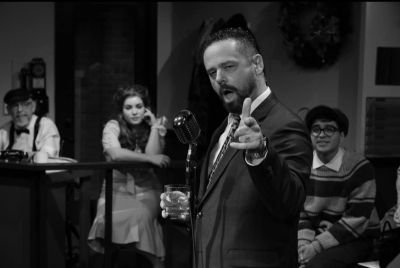 COVID safety precautions are in place. There is no intermission in this show.

Lamplighters is partnering with Foothills Art Gallery, so check out artwork in the lobby. All artwork for sale.

"The Cocktail Hour" by A.R. Gurnay