Tillerson’s ouster comes less than 48 hours after Tillerson blamed Russia for the poisoning of a Russian spy in Britain with a powerful neurotoxin. 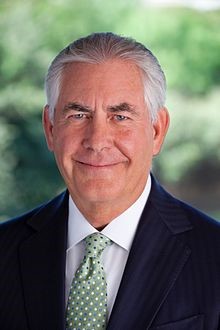 On the eve of confirmation hearings, an article by investigative reporter Antonia Juhasz finds that the former Exxon Mobil CEO is personally named in a current case alleging that security forces employed by the company engaged in serious human rights abuses, including murder, in Aceh, Indonesia.

Juhasz also reveals the company’s long record, under Tillerson’s leadership, of alleged human rights violations; unsafe working conditions; investor and public fraud; destruction of the environment, climate and public health; support of dictators; contributions to global instability and inequality; and being party to wars and conflict.

January 9, 2016 (Chicago) -- Rex Tillerson is scheduled to appear Wednesday before the Senate Foreign Relations Committee to be considered for U.S. secretary of state.

A new In These Times cover story by Antonia Juhasz—“Rex Tillerson Could Be America’s Most Dangerous Secretary of State”—reveals for the first time that Tillerson himself is named in a suit alleging “murder, torture, sexual violence, kidnapping, battery, assault, burning, arbitrary arrest, detention and false imprisonment” by security forces employed by Exxon Mobil in Aceh, Indonesia from 2000 through 2004, including while Tillerson served as senior vice president and then president of Exxon Mobil.