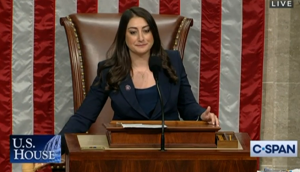 Congresswoman Jacobs is a co-lead of the bill introduced by Congresswoman Kathleen Manning in response to Justice Clarence Thomas calling for reconsideration of Griswold v. Connecticut, the landmark ruling which declared states could not outlaw birth control access for married couples.

East County’s Republican Congressman Darrell Issa voted against the bill, as did the vast majority of Republicans though several did cross party lines to vote in favor. The measure passed by a 228-195 margin.

Jacobs  gave an impassioned floor speech in support of the measure, which was also backed by San Diego’s other three Democratic representatives (Scott Peters, Mark Levin, and Juan Vargas.)