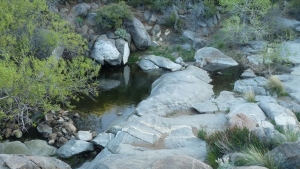 We learned that Cleveland National Forest publishes a webpage where you can get information on current road closures, along with the reasons which include weather, fire danger (sparks from vehicles and hunting have started major wildfires locally), law enforcement activities, health and safety, and habitat protection. The website is http://www.fs.usda.gov/detailfull/cleveland/alerts-notices/?cid=stelprdb5340229

Reader Tom Lemon laments in an e-mail sent to Cleveland National Forest, “I drove from the Sunrise Highway to Interstate 8 many times on Kitchen Creek Road and enjoyed the wilderness experience; me and my sons spent many days there hiking and taking pictures. Now it’s “access denied.” What the heck?”

As of today, Kitchen Creek Road in the Descanso area is reopened, but remains subject to closure depending on weather and fire danger, according to the CNF website.  Other roads are closed, however, including several in East County. Those include Bear Valley Road in Descanso (partially opened, but access to Buckman Springs Road is closed traveling south from Pine Valley), Miners Road in Descanso (closed due to threatened and endangered species concerns), and Thing Valley Road (closed due to weather conditions and resource concerns). Several other roads in the vicinity are listed as subject to closure as well.

Elsewhere in the Cleveland National Forest, there are also closures in the Palomar and Trabuco areas.

Maureen Anderson with the U.S. Forest Service told Lemon via e-mail that the reason for the closure of Kitchen Creek Road is Border Patrol issue. “Homeland Security trumps the Forest Service,” she wrote. “The road was being used as a means of evading the Border Patrol checkpoint on I-8. So was La Posta Road, which went all the way to the Sunrise [Highway].”  Bear Valley Road, off Buckman Springs in the Descanso area, was also used to evade the checkpoint on Buckman Springs Road, she added.  “There were some wild BP chases up Kitchen Creek Road that nearly resulted in fatalities; very dangerous for your average forest user.”

Public safety concerns led to closures, Anderson states, adding,  “So that is why we don’t get to enjoy them anymore. I guess if they ever decide to remove these checkpoints in our lifetime the Forest Service will be allowed to open the gates.”

If you encounter a closed road, you are allowed to park near the gate without blocking vehicle access and hike or mountain bike around the gate, but not drive your vehicle.

Hi Hiker Gal I've found aluminum arrows in the Lagunas that were used by hunters. Two were stuck in trees and another on the ground. I admire their hunting method that takes more skill and effort than using a high powered rifle, but I would be concerned about a stray arrow. No sound , no warning that hunters are in the area. There is a place along Kitchen Creek Road where there's a small stream, probably dry now but there were frogs and it is a little oasis.
“There were some wild BP chases up Kitchen Creek Road that nearly resulted in fatalities" What the heck? The Border Patrol would be the cause of fatalities! Use the radio, call in the helicopter. There's no reason to risk a crash for a few pounds of pot or to arrest some immigrants.
We recently went hiking/camping in an area outside the Laguna Mountain Recreation Area along Kitchen Creek Road that is legal to camp in for free. We were required to get a permit at the Visitor Information Center off Sunrise Hwy. The reason given was so that they would know we were there in case of a fire. They also told us there would be no camping allowed along Kitchen Creek Road (except maybe at Cibbits Flat Campground) starting in September because of fire concerns. We also do not like Kitchen Creek Road being closed to the public. However, bicyclists, motorcyclists, and backcountry drivers besides hikers use this road where it is now open to the public. There was a group of boy scouts also camping there the weekend we did. There are many curves on this mostly paved road that could be hazardous if vehicles travel at high rates of speed. I can see their perspective for the safety of people using the road for recreation being injured by someone speeding away from the Border Patrol. (Maybe put in speed bumps - ?) We also remember being able to use the entire length of Kitchen Creek Road and miss doing that. If it is reopening for a time, we will be checkin' it out, for sure. We agree with Tom Lemon that the area is remote and scenic, with lots of wildlife, including deer (we saw two). I wonder what made them decide to open it up again? There is a new Border Patrol Station just down the mountain off Hwy. 8. Fred Canyon Road is also sometimes closed to off-road driving which is another scenic road next to Cibbits Flat Campground that also offers opportunities for backcountry exploration. Speaking of wildlife, as we were driving out, we spotted something unusual we had never seen before. There were two men about 15 ft. or so up off the ground sitting in chairs attached to trees. We think they were hunting and had bows and arrows, which I think is allowed in this area. We had just gone for a hike in another area closeby. Kinda makes you think . . .