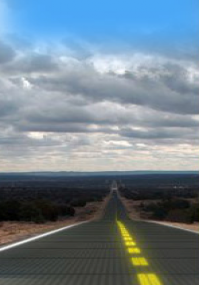 June 21, 2012 (San Diego’s East County) – it sounds like a vision out of Utopia. Imagine driving on highways and streets made of glass—12-x12 foot solar panels that produce electricity and ultimately, recharge your solar-powered car as you drive.

No need for power lines or power plants anymore, since roads and driveways will actually deliver electricity straight to your doorstep.

Sound impossible? Think again.  The Federal Highway Administration issued a contract to Solar Roadways, brainchild of Idaho electrical engineer Scott Brusaw, to build the first ever solar Road Panel prototype in 2009. In 2011, a contract to build a solar parking lot was issued--with completion due this September

But a solar roadway can do much more than produce power--and the potential is enlightening.

Each panel includes smart sensors.  The road can light up to warn motorists if an animal or pedestrian crosses the highway at night.  It can save electricity by turning on roadway lighting in remote areas only when a vehicle comes along.  It can even notify law enforcement to assist in tracking down stolen vehicles or suspects’ cars equipped with GPS tracking devices.

Heating elements embedded in the glass road will melt away snow and ice in cold climate areas, improving safety for motorists and saving money for cities.  No more snow plows.  Residents with solar glass walkways can pitch their snow shovels, too. 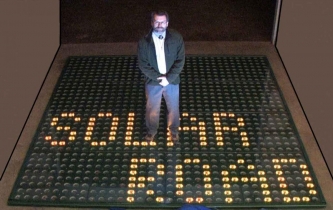 Business owners can customize the look of their solar glass parking lots with the push of a button to change colors, parking configurations, or even display marketing messages. Customers can recharge electric cars at solar charging stations, though ultimately the highways themselves may be equipped to charge vehicles on the go.

Homeowners can similarly turn a driveway or patio slab into a sports facility by configuring a basketball court,  hopscotch or shuffleboard layout with colored LED (light emitting diode) lights embedded in the glass.

Brusaw says he’s dreamed of creating an electric road since he was a child—and sketched out a drawing before most people ever heard of solar power.

His grandiose vision is to someday replace highways across American with solar roadways. He predicts that ultimately the U.S. can produce three times more power than it uses with this technology.

The cost to build a solar roadway is about three times the cost of conventional road currently.  But Brusaw points out that ultimately, solar roads will pay for themselves in a variety of ways.

Solar roads will produce clean power, enabling the decommissioning of existing power plants and power lines.  The system would eliminate need for new fossil-fuel power plants, nuclear facilities, massive desert solar and wind projects, and power lines.  No more dependence on fossil fuels for transportation or electricity production in any region that adopts the technology.

A solar roadway system will dramatically reduce greenhouse gas emissions, too, that contribute to global warming.  It would also reduce air pollution, saving American on health costs for disease such as asthma and lung cancer.

A commitment on a large scale would create jobs in both manufacturing and installation. Someday, every highway in American could be replaced with 5 billion solar roadway panels, Brusaw has estimated.

The U.S. owned and built solar roadways will also give us energy independence from foreign oil, an important national security consideration.

Each panel has three layers- a road surface, an electronics layer, and a basic plate layer that collects energy from the sun and distributes that power to homes and businesses connected to the solar roadway.

Recycled materials can be used to internal supports—so instead of going into landfills or polluting oceans, materials such as plastic bags, water bottles and tires can be mixed with organic materials to create parts of the solar roadway system—using trash to produce power.

The roadway could also carry high-speed data transmission, too—such as cable TV and Internet—all part of a smart grid system.  Brusaw even envisions tying it into a stormwater recycling system to reduce urban runoff and recycle water

It can even report damage to a roadway to a highway maintenance department—and consider transmitting power while shutting off the affected panel(s).

Panels are still in testing phases.  The inventor told ECM he aims to start with parking lots first to prove the viability of his vision.

Unlike the infamous “road to nowhere” in Alaska, solar highways and roadways have the potential to go virtually everywhere.  Individual panels can even be taken into rural villages in third world nations, bringing electrical power for cooking and water purification to impoverished people around the globe.

U.S. Senator Mike Crapo, a Republican from Idaho, a supporter of the concept, has this to say about the prototype. “During the course of the construction, we learned many lessons and discovered new and better ways to approach this project.”  Those methods and discoveries are discussed in detail at the website http://solarroadways.com.

Intelligent highway: has many links:  http://solarroadways.com/highway.shtml