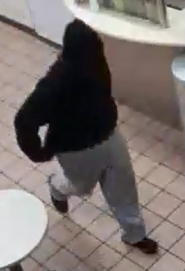 The suspect entered the store at 8807 1/2 La Mesa Blvd. brandishing a semi-automatic handgun and demanded money at the register. After an employee complied, the suspect ordered both employees to the floor,  Sergeant Katy Lynch told East County Magazine. He then fled with the cash in an unknown direction.

His face was not visible under the mask, however he is believed to be a light-skinned black male about six feet tall and weighing about 200 pounds.  He wore a black sweatshirt, light-colored pants and dark shoes.

La Mesa Police, with help from the Sheriff's ASTREA helicopter, searched the vicinity but the suspect remains at large.

Anyone with information is encouraged to call the La Mesa Police Department. You may also call Crime Stoppers’ anonymous toll-free tip line (888) 580-TIPS (or www.sdcrimestoppers.com).  You can remain anonymous, and be eligible for a reward of up to $1,000 for information in this case.