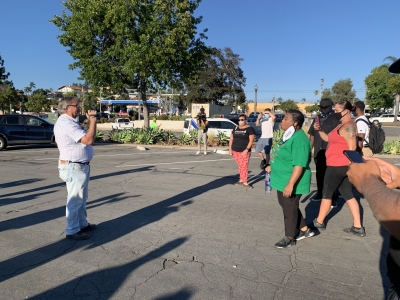 August 12,  2020 (La Mesa) -- La Mesa police detained but later released a man with alleged ties to a racist group  during a Black Lives Matter protest on Tuesday, following a vocal confrontation with activist Tasha Williamson.  LMPD led Roger Ogden into the police station in handcuffs for reportedly displaying pepper spray during the altercation. On his blog, Ogden called Williamson a “terrorist” and called her a "liar" at the rally. Williamson denounced Ogden at the rally as a “racist clown.”  Each has denied the others claims of racism and inciting terror.  View video.

Despite verbal barbs, at the August 11 rally and an earlier protest on May 1, protesters remained non-violent. Unlike a major protest May 30 that ended in burning of buildings, rioting and looting, the only arrests at the most recent protests were of individuals accused of harassing protesters, both with ties to white nationalist or racist groups. On May 1st, as ECM reported, Ryan McAdams, who has a history of racial clashes, was arrested for battery and pepper spray possession.