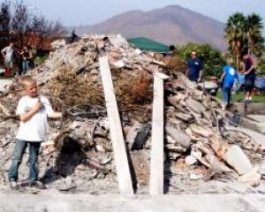 “We cannot afford to do those things without jeopardizing the future for our kids,” Romney said, when asked directly about relief for victims in Mississippi, Louisiana, Tennessee, Massachusetts, and other communities hit by tornados and flooding should not receive governmental assistance. He argued it is “simply immoral” to have deficit spending that could harm future generations.

Romney noted that the U.S. has been struck by a “punishing series of  billion-dollar disasters.” Top climate officials in the U.S. and globally have forecast that such mega-storms and catastrophic wildfires are likely to become more frequent due to global climate change. Yet Romney called for the Federal Emergency Management Agency (FEMA) to be privatized and federal funds for disaster victims to be axed.

During Hurricane Katrina, the administration of George W. Bush drew criticism for ignoring warnings to shore up levees and not having resources available to help survivors fast enough.  But even the conservative Prseident Bush and his cabinet never considered sending no response at all—or denying FEMA disaster relief funds to victims of the tragedy.

Romney’s views on denying disaster relief to families who have lost their homes in wildfires, floods, tornados, earthquakes or other catastrophes reflects the anti-government ideology from the most extreme elements of the Tea Party and Libertarian philosophies, though even many members of those organizations would stop short at cutting off funds to their neighbors in need.

If Governors request help following major disasters, Romney’s message is clear: You’re on your own.

By contrast, today President Obama announced that he has met with FEMA and other federal agencies to preposition resources and respond swiftly to those in need.

“We just had an excellent meeting with the FEMA team here, the various agencies that are in charge, including the Department of Defense, the Department of Energy and others that are going to need to respond very quickly,” the President announced today.

He added, “Under Craig Fugate’s leadership here at FEMA we’ve had a chance to talk to the regional officials as well. And I just had a phone call with the governors of the potentially impacted states, as well as some of the major cities in the region. At this stage, everybody is confident that the staging process, the prepositioning of resources, commodities, equipment that are going to be needed to respond to this storm are in place.”

The President offered these additional  reassurances: “My message to the governors, as well as to the mayors, is anything they need, we will be there. And we’re going to cut through red tape. We’re not going to get bogged down with a lot of rules. We want to make sure that we are anticipating and leaning forward into making sure that we’ve got the best possible response,” he concluded.

Similarly, the President issued a federal disaster declaration for the recent Shockey Fire here in East County, opening the door for those who lost their homes to receive help to rebuild their lives. Just as Bush issued disaster declarations for the 2007 and 20003 firestorms.

Romney’s seemingly heartless outlook fails to consider that refusing to offer short-term assistance to disaster victims would likely trap many survivors in poverty for the long-term, since few have the resources to rebuild their families’ lives on their own.

Plus if residents in rural towns such as those impacted by fires in East County receive no federal disaster relief, these communities could be at risk of never recovering, instead turning into ghost towns.

Governor Romney may view penny-pinching in disasters as better for the future of our children, but no doubt those who have survived the nightmare of an East County firestorm or other natural disaster would take a very different view.