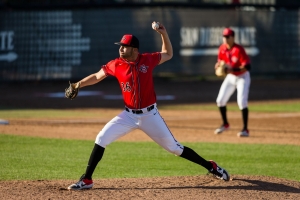 May 12, 2019 (Fresno) - The San Diego State baseball team suffered an 8-3 loss to Fresno State in the series finale on Sunday afternoon. The Aztecs, now 2.5 games behind Fresno State for first place in the conference, are now 31-21 overall and 15-11 in the Mountain West.

The Aztecs quickly fell into a hole, with the Bulldogs scoring six runs in the first inning. Seven of the Bulldogs first eight hitters reached base.

Jacob Flores, who relieved starter Aaron Eden in the first, performed well on a short-notice appearance. Flores pitched 4.2 innings, allowing just one run on three hits with four strikeouts and a walk.

The Bulldogs extended their lead to 7-0 in the second inning. SDSU broke through with a pair of runs of their own in the third, with Angelo Armenta driving in Matt Rudick on a fielder's choice to second base before Armenta later scored on a wild pitch to make it 7-2.

The Aztecs added another run in the fourth, with Mike Jarvis scoring on a 6-3 double play.