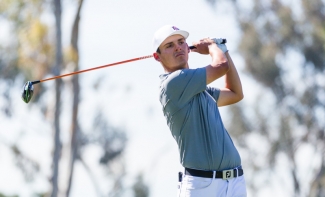 January 29, 2018 (Tucson) - The San Diego State men's golf team sits in 10th place at the Arizona Intercollegiate after play was suspended on Monday toward the end of round two due to darkness. As a team, the Aztecs remain at 40-over par through holes 14-15 at the par-71, 7,292-yard Sewailo Golf Club when dusk fell.

Battling breezy conditions, San Diego State finished the opening round in a three-way for 14th place with Iowa State and Louisiana Tech after recording an uncharacteristic 41-over-par 325, before climbing four places in the afternoon. The tournament is scheduled to resume on Tuesday, starting at 8 a.m. MT/7 a.m. PT.

Individually, Puwit Anupansuebsai (Nakhon Phanom, Thailand) finds himself in a tie for 21st at 8-over with four holes left in round two. The Aztec freshman opened with an 84, but catapulted 52 places on the leaderboard to his current position thanks to a team-high six birdies, including three straight on holes 15-17 to complete his front nine. With his effort, Anupansuebsai sits just two shots out of the top 10.

Junior Otto Vanhatalo (Espoo, Finland) remains one stroke behind his SDSU teammate in a tie for 25th at 9-over. After logging an 82 in the opening round, the Torrey Pines High alumnus made fortuitous leap of his, climbing 39 places in the standings on the strength of five afternoon birdies, including back-to-back conversions on the 15th and 16th greens.

In addition, sophomore Trevor Norby (Carlsbad, Calif.) and senior Blake Abercrombie (Rocklin, Calif.) ended the day in a 10-way logjam for 52nd at 12-over when play was halted.

After opening with an 80, Norby still slipped three spots in the standings despite minimizing the damage on his scorecard with three pars and two birdies during a current six-hole stretch of the second round.

Abercrombie, meanwhile, experienced a more precipitous drop, falling 19 places on the leaderboard after opening with a 79. The northern California native made birdie on the par-5, 638-yard No. 10 in the round two and has reeled off eight consecutive pars with four holes to go.

Elsewhere, PJ Samiere (Kailua, Hawaii) will be looking for a strong finish on Tuesday after landing in the 82nd spot at 17-over. The Aztec senior carded an opening round, but has generated some momentum of late with

Through holes, Baylor’s Braden Bailey (E) owns a one-shot lead over Andre Garcia of New Mexico (+1), while Charles Corner of UTEP (+2) and UTSA’s Michael Rome (+2) are tied for third.

The Aztecs also have four golfers playing in the auxiliary Arizona Medalist Intercollegiate individual tournament, being conducted at the nearby par-72, 6,902-yard Randolph North Course.

Play Suspended Due to Darkness