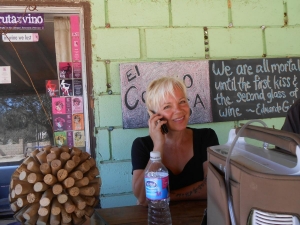 by Susan A Mahalick. Photos and article by the author

June 23, 2015 (Baja, Mexico) - I met Sitara when she first got here from Costa Rica with not much more than the clothes on her back and a dog named Lily. We became fast friends, fast. She got enrolled in the wine school which has tough requirements, one of which is knowing Spanish well enough to understand the classes and become proficient in business afterwards. I was her very first investor and it is indeed the best investment I have ever made. In a few short years she is now sending her wines to Mexico City which is the ultimate market here and poised to export to the United States. It takes at least a year to become legal, getting a tax stamp for your bottles, becoming a legal resident and the like. Since her grandmother was Mexican this allows her to become a dual citizen with the US. Originally from Alaska, she is an adventurer like so many of us expats in Mexico. She prefers to create blends so I just got a case of her Dolcetto at the rock bottom price of five dollars a bottle. I am going to use some of these along with her new house wine, Ruffian, for a wine tasting BBQ tomorrow on my patio with two friends.