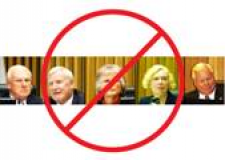 April 1, 2012 (San Diego’s East County)—Last month, we reported on a proposal to eliminate all community planning groups, a plan put forth by a “Red Tape Reduction Task Force” of developers appointed by County Supervisors.

Today, citizen activists and backcountry volunteer community planners announced that they have secured signatures to place their own measure for cutting red tape on the ballot.

“Our plan would eliminate the entire Board of Supervisors and the Department of Planning and Land Use (DPLU), returning control of decision-making on land use issues to planners in local communities,” said a press release issued by Save Our Backcountry (SOB), the coalition favoring the ballot measure.  “This is the ultimate way to reduce red tape! Just think how much money and paperwork we’ll save.”

Currently, local planners have only advisory status.  But that could soon change.

“Our initiative will give our local planners the power to say no to projects we don’t want – putting real teeth in this measure,” said Barry De Hatchett, spokesperson for SOB.

Backcountry planners in recent months have been barraged by controversial projects but have thus far lacked the ability to block projects such as Sunrise Powerlink,  industrial-scale wind farms and private military training camps in fire-prone East County.  With passage of the ballot measure, supporters say citizens in local rural, mountain and desert towns will finally have the right to make up their own minds about these and other projects.

Developers will no longer be referred to as “clients” if DPLU is axed by the measure. Instead, local residents and voters will be the “clients” and developers will be the “applicants.” Fees from applicants will go directly into newly established “community enhancement funds”  to revitalize local towns, with all voters in the community invited to town hall forums to determine how those revenues shall be spent.

Organizers expressed regret at having to oust Supervisors Dianne Jacob and Pam Slater-Price, who have both voiced objections to the Red Tape Reduction Task Force’s scheme to axe planning groups.

“We hope to hire Jacob as our backcountry warrior—lobbyist for SOB. This will finally give us a voice in the halls of Washington D.C. and Sacramento,” De Hatchett indicated, adding that the lobbyist’s salary would be paid for out of the savings on salaries for the five supervisors.

Supervisor Bill Horn promptly announced his plan to accept a new position as lobbyist representing developers if the initiative succeeds.

“After all, he’s been arguing on developers’ behalf for years on the Board of Supervisors. This just formalizes the arrangement,” a spokesperson for the development industry confirmed.