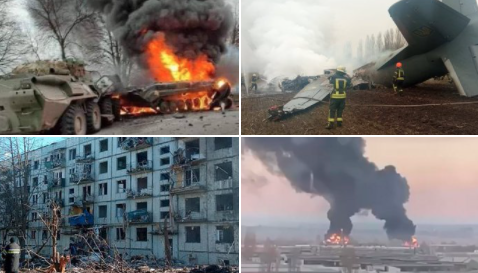 February 24, 2022 (San Diego) – In defiance of international law, according to the United Nations, Russia last night launched a full-scale attack on the Ukraine including missile attacks on the capital, Kyiv, military targets and other cities far beyond separatist regions in dispute. Russian troops and tanks are also moving in on three sides of the Ukraine in the largest military threat Europe has faced since World War II.

Ukraine’s leaders have fled the capitol.  Chillingly, today exiled Ukrainian President Volodymyr Zelensky tweeted, ““Russian occupation forces are trying to seize the Chernobyl [Nuclear Power Plant]. Our defenders are sacrificing their lives so that the tragedy of 1986 will not be repeated," rerferring to the core meltdown at the nuclear reactor site

He added, “This is a declaration of war against the whole of Europe.”

President Joe Biden condemned Russian President Vladimir Putin for choosing ”a premeditated war that will bring a catastrophic loss of life and human suffering,” adding,”The world will hold Russia accountable.” In addition to sanctions already imposed, Biden announced he will convene a meeting of G7 leaders today and coordinate with NATO allies to ensure “a strong, united response that deters any aggression against the Alliance. Tonight, Jill and I are praying for the brave and proud people of the Ukraine.”

Putin earlier denied reports that he planned to invade, then created a pretext for military action by recognizing the independence of two Russian-separatist sympathizing regions in eastern Ukraine. The U.S. and prominent European leaders characterized that tactic as a false-flag operation.

But Putin’s full-scale attack last night goes far beyond the separatist regions, threatening the entire nation of the Ukraine and some fear, other European countries. Putin has long lamented the fall of the Soviet Union and many strategists have voiced concerns that his end goal may be to next attack other nations in an effort to rebuild the former USSR.

In an emergency meeting of the United Nations Security Council last night, Ukraine’s ambassador asked the U.N. for help and condemned Russia’s action.  “It is the responsibility of this body to stop the war,” he stated, then called on Russia’s ambassador to step down from chairing the meeting, a request that the Russian ignored, continuing to preside over a session in which Russia retains veto power over any actions.

“There is no purgatory for war criminals. They go straight to hell,” the Ukrainian ambassador fired back.

Germany’s ambassador accused Russia of “violating the core principals of the United Nations Charter” with “unprovoked military actions.” She added, “We will be steadfast in our support for Ukraine and our support for the UN Charter.  Russian aggression will come at the unprecedented price politically, economically and morally.”

The U.S. ambassador denounced Putin for “delivering a message in total disdain of this body.”  She added, “As President Biden said tonight, Russia alone is responsible for this death and destruction this attack will bring, and the United States and our allies  and partners will respond in united and decisive ways. The world will hold Russia accountable.”

The United Kingdom’s ambassador called this “a grave day for the Ukraine and the principals of the United Nations,” then called on the council to “do all it can to stop the war and support the charter.”

Ironically, while world leaders almost unanimously condemned Russia’s actions, former President Donald Trump praised Putin for recognizing separatist regions in Ukraine just hours before the invasion began. ‘Putin declares a big portion of the Ukraine as independent, oh that’s wonderful…I said, How smart is that? Now think of that. Here’s a guy who’s very savvy. I know him very well Here’s a guy that says I’m gonna declare a big portion of the Ukraine independent and we’re gonna go in and we’re gonna help keep peace. I’ve got to say, that’s pretty savvy.” Trump made the remarks in an interview with the conservative media show Clay Travis and Buck Sexton.

Even prior to the invasion, the Russia-Ukraine tensions had split the Republican party, with some calling for the U.S. to maintain isolationism while others clamored for stronger sanctions.

San Diego Congressman Darrell Issa, a Republican, told KUSI shortly before the invasion that in the so-called separatist region, “some years ago under the guise of freedom, Russian soldiers that donned Ukrainian outfits took the area against the will of the Ukrainian government.”

Issa said of a recent Putin speech on Russian history, “He was giving us his map for rebuilding this entire empire,” suggesting the Czech Republic, Poland, Yugoslavia and other countries could be taken over next. “Clearly this is his ambition..He intends on taking it all if not now, then eventually.”

Putin has also been outspoken in his opposition to NATO expansion and to Ukraine having a democratic form of government, leading some to suggest his goal at least short-term may to replace Zelinsky and install a totalitarian form of government in Ukraine.

Issa faults “weak” leadership over the years starting with Jimmy Carter for having the U.S. give up its leadership as an oil exporting nation, giving Russia leverage since many nations rely on Russia for oil and gas imports.

After the invasion, she issued a statement strongy condemning Russia, urging strong sanctions, continued diplomatic efforts and a lifting of the refugee cap to admit Ukrainian refugees.

Today, Senate minority leader Mitch McConnell, a Republican, told reporters that President Biden should increase sanctions "all the way up" against Russia after Moscow began a full-scale military invasion of Ukraine. "Don't hold any back," McConnell added. "Every single available tough sanction should be employed and should be employed now."

The European Union is sanctioning 27 Russian individuals and organizations, including banks and cutting off Russia’s ability to access capital in European banks, also banning trade between the EU and the two rebel-held regions in the Ukrainian area.

Germany’s Chancellor Olaf Scholz has put on hold permission for the Nord Stream 2 gas pipeline from Russia to Germany to open.

Around the world last night and today, protesters flocked to the streets of major cities to protest Russia’s actions.

Thousands of courageous Russian citizens marched in the streets of Moscow, where Russian police prepared to crackdown on the dissident voices.

Germany lit up the Brandenburg Gate in Berlin in the national colors of Ukraine, blue and yellow. In Paris, city hall aws also illuminated in Ukraine’s colors.

Berlin’s Mayor Franziska Giffey stated that Berlin, where the 1989 fall of the Berlin Wall symbolized an end to the Cold War, is “showing our solidarity with the people of Ukraine, the many Berliners wit Ukrainian roots, but also with the many Russians who want peace in Russia and Ukraine,” Reuters reports.