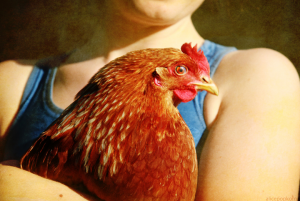 July 10, 2015 (San Diego’s East County) – Across the nation, people have flocked to owning backyard chickens and other poultry.  But now the Centers for Disease Control  has issued a warning not to cozy up to your backyard birds.  That’s because four separate Salmonella outbreaks linked to backyard flocks have sickened 181 people in 40 states, including several cases  in California.

In  one outbreak, CDC conducted interviews and found that 86% of the ill people had conducted with chiceks, chickens, ducks or ducklings before falling ill. Moreover, the CDC reports, “Many ill people in these outbreaks reported bringing the live poultry into their homes, and others reported kissing or cuddling with the live poultry. These behaviors increase a person’s risk of a Salmonella infection.”

Who knew that chicken snuggling was so popular?