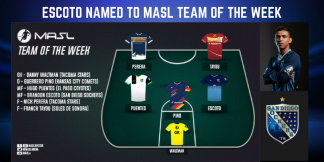 January 16, 2018 (San Diego) - The Major Arena Soccer League announced today that San Diego Sockers midfielder Brandon Escoto has been named the MASL Team Of The Week for week 12. The honor is his first of the season.

Escoto made it look easy against rival Tacoma, as he scored three goals and an assist on the way to a big Sockers home win. The four-point game performance was his best output of the season.

San Diego’s leading scorer Kraig Chiles was placed on the honorable mention list for his two goals and one assist match.

San Diego plays three games in four days beginning Thursday in Ontario, Saturday in Sonora, Mexico and concluding at home on Sunday against the Fury at 5:05 p.m. It will be First Responders Appreciation Night and all first responders who show ID or wear their uniform to the game will get a 50% discount on tickets.