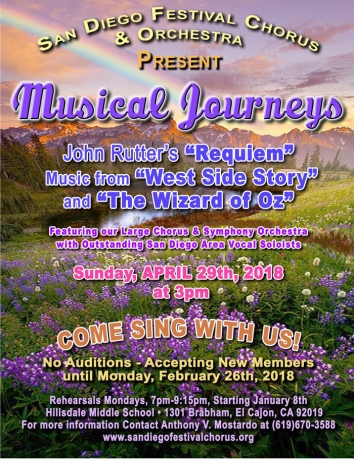 Deadline for new members to apply is Feb. 26 to perform in Spring Concert April 29

February 15, 2018 (San Diego’s East County) -- The San Diego Festival Chorus, based in East County, is in its 18th season, and never sounded so good!

We are non-sectarian, performing choral masterworks and popular choral arrangements in the same program.

Our winter concert featured the Christmas portion of Handel’s “Messiah” and a zany “Musicological Tour of the Twelve Days of Christmas”. 1400 people attended our performance at the College Avenue Baptist Church, a marvelous venue.

This spring’s concert starts with John Rutter’s “Requiem”, a modern choral masterpiece. Anyone would be inspired by it. Then we get to perform songs from a new choral version of “West Side Story”. It’s a wonderful American musical. We finish the concert with delightful songs from “The Wizard of Oz”.