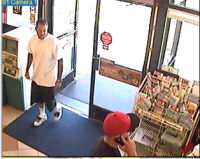 June 7, 2011 (Bonsall) --San Diego County Crime Stoppers and investigators from San Diego County Sheriff’s Department seek help from the public to identify a suspect wanted for a battery that caused serious injuries to the victim.

On Sunday, April 3 around 5:30 p.m., the suspect punched a man in the face twice at a gas station in the 5500 block of Olive Hill Road in Bonsall. The attack was unprovoked and the victim was knocked unconscious. The victim sustained serious facial injuries and a fractured bone in his leg. The suspect fled in a large, dark  lifted pickup truck with a white stripe on the side.

There were two additional males in the truck with the suspect. The suspect is a white male about 5’9” tall with a muscular build. He has short brown hair with a possible goatee and sideburns. Suspect has sleeved out tattoos on both arms. 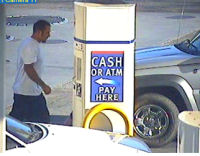 Anyone with information on the identity and or location of the person responsible for this crime should call San Diego County Sheriff’s Detective Jim Pucillo at (760) 451-3100 or the Crime Stoppers anonymous tip line at (888) 580-8477. Crime Stoppers is offering up to a $1,000 reward to anyone with information that leads to an arrest in this case. Anonymous email and text messages can be sent in via www.sdcrimestoppers.com.