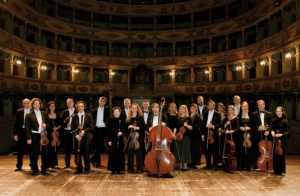 April 7, 2015 (El Cajon) – Members of the San Diego Early Music Society (SDEMS) will be performing baroque concertos for harp, mandolin and flute at Cuyamaca College’s Performing Arts Center on Thursday, April 9 at 7:30 p.m. The program will hear is comprised of concerti of Vivaldi, Telemann, Durante, Corelli and Handel for various combinations of soloists.

“SDEMS members asked for a return visit by Concerto Koeln, and we’re only too happy to comply,” said president Mark Lester. “We’re delighted to be able to bring such an accomplished and widely recognized performing group to our newest venue in East County.”

Founded by musicians dedicated to presenting period performances of music of the 18th and early 19th centuries, this 22-piece ensemble has few equals today. With more than 50 recordings to their credit, they have been hailed around the world. This program includes concerti of Vivaldi, Telemann, Durante, Corelli and Handel for various combinations of soloists.

The widely acclaimed Concerto Koeln was founded in 1985 by graduates from several European Colleges of music. Its young members all specialize in performing on period instruments and came together with the aim of rediscovering 17th- and 18th-century orchestral and operatic music on the basis of historical performing practice.

Somewhat unusually, Concerto Koeln operates without a conductor in its desire to create a close, chamber-like sense of ensemble. The group’s artistic director is its leader, Werner Ehrhardt, although this does not preclude other members of the ensemble from taking on specific functions, the ultimate aim being to draw on the artistic ideas of every single player. Members also organize their own seminars and, at the same time, pursue independent careers as chamber musicians.

Concerto Koeln has already appeared to immense acclaim in many musical capitals and at numerous well-known festivals. The group is particularly interested in reviving unknown or rarely performed works, and to this end joined forces with Deutschlandfunk (a German radio) in 1992 to found the Festtage Alte Musik Koeln (Cologne Festival of Early Music). Since 1994 the festival has been run in association with Deutschlandfunk’s successor, Deutschlandradio. In 1995 Concerto Koeln was awarded the Critics’ Prize for Music for its contribution to the early music revival.

Concerto Koeln has recorded for different labels such as Harmonia Mundi France, Capriccio, Sony, and Fnac. Now the ensemble is under exclusive contract to Teldec Classic International. The ensemble’s most recent release is a recording of symphonies by Johann Baptist Vanhal and Felix Mendelssohn’s string symphonies.

Student discounts are available throughout the season, subject to availability. Details are on the SDEMS website. Subject to availability, $10 rush tickets in the last two rows of the venue are sold in the last two weeks before a concert. Rush tickets must be booked by phone or purchased at the door. Groups of 10 or more are eligible for 20 percent off regular ticket prices.

This year SDEMS has added the Adventure Series, featuring world-class ensembles and soloists performing repertoire from a little later in history, pushing into the Classical and even Early Romantic repertoire.