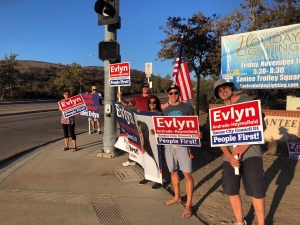 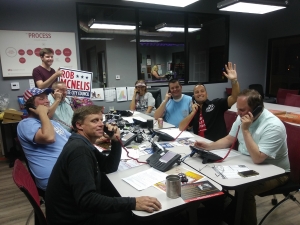 November 6, 2018 (San Diego's East County ) -- In the final days and hours before today's election, candidates have been working hard to get the word out about their candidacies. Here are some photos from the campaign trail:

In the hotly contested Santee City Council district 1, Evlyn Andrade Heymsfeld says she's knocked on 3,000 doors -- and taken to the streets with supporters to wave at passing motorists as she pledges to work on reducing traffic gridlock.(photo by Jonathan Goetz)

Her opponent, Councilman Rob McNelis, has been busy phone banking -- with support from Mayor John Minto. (photo by Jonathan Goetz)