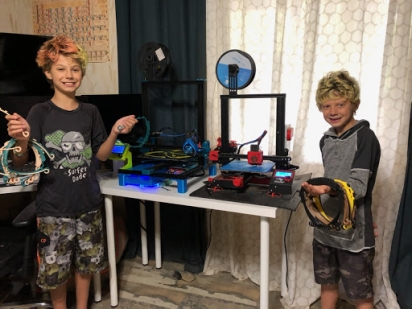 April 16, 2020 (San Diego) -- Nick Warner and his family of four are contributing their volunteer efforts to help healthcare workers on the front lines. Warner, who is a part of the Jesus Geeks Computer Services Ministry at the Rock Church in San Diego,  along with his wife Stephanie, and their children Ryley, 10, and Mason, 8, are utilizing their 3D printers to print face shields for local hospital staff that are in desperate need of Personal Protective Equipment (PPE) to guard them from the novel Coronavirus.

Currently, the family has donated 375 face shields to local area hospitals, with 100 more ready for distribution. 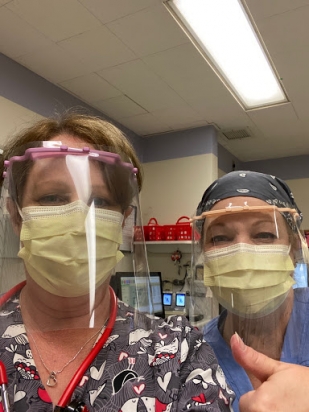 What started out as a project to help a friend who is a nurse in the ICU has transformed into a much larger project. Stephanie and Nick heard the heartbreaking stories of medical workers like their friend who were unable to access the necessary PPE in which they were in critical need. The family desired to help their friend out and began printing a few face shields for her and others with whom she worked.

Soon, the word spread and other facilities were contacting the Warners asking, “How do we get these [face shields]?” The Warners realized how big of a need this was and began using their three 3D printers in order to produce as many shields as possible, often printing 24 hours a day.

Stephanie Teas, who was one of the nurses to receive the first batch of shields, said, “These 3D face shields have helped us, the individuals on the frontline, protecting ourselves. Supplies are low and having these face shields being made and donated gives us comfort in knowing we will be protected.”

The Jesus Geeks was started in 2008 and is the technology outreach group at the Rock Church.  They are a group of volunteers that provide technology education and technical support for underprivileged families and the other community service groups of the Rock Church. Volunteers collect donated computers, refurbish them and give them to underprivileged students and families locally and abroad. All computers are equipped with educational software and a digital Bible. 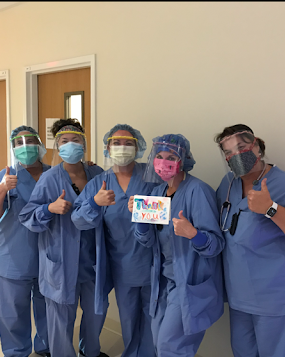 Nick has been a part of the ministry for about a year and is a close friend of Jack Costner, leader of the Jesus Geeks Ministry. They have studied and attended many conferences together. They are passionate about technology and helping others learn and grow through the use of computers, software, and other electronics.

The Warners initially purchased their first 3D printer a few years ago with funding from the charter school that supports their homeschool studies. Nick is tech-savvy and the boys love to build and make things, so purchasing this 3D printer was a great tool for learning in their home.

The Warners later received another printer as a Christmas gift and the boys used profits from an entrepreneur fair they entered in order to pay for the third printer. When the Warners first started this project, three 3D printers were sufficient. But once the need was exposed, they realized that these printers were not enough to print the high quantity of face shields necessary to provide for the medical staff in need of protection.

This family project has morphed into something much greater than themselves.

Stephanie Warner shares, “This is stretching us out of our comfort zone, but it’s not about us.”

This is a family affair, and the boys not only help with printing the masks, but they also pray over each one and write ‘Thank You’ cards for the medical workers. These shields are not only providing protection, they are also bringing hope.

As the news spread, others heard about the Warner family’s efforts and wanted to help. Enough money was raised to purchase six more 3D printers, which arrived Monday afternoon, and their oldest son, Ryley, set up two of them all by himself. They also received enough donations for the material to produce more than 1,000 more shields. 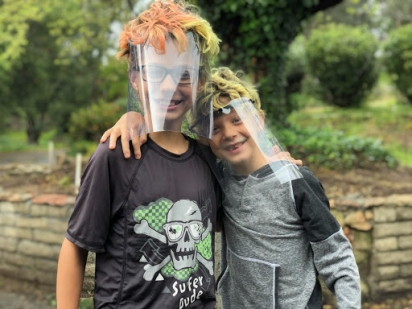 These 3D printers use a spool of filament, similar to thread, but it is plastic that is wound around a spool. They put that into the printer and then use the specific face shield file which tells the printer exactly how to form the shield. The spool is heated through the nozzle and prints layer by layer as it gradually builds into the face shield. It takes the two smaller printers an hour and 45 minutes to print 2 shields, and the larger printer produces 3 shields in a little over an hour. With the six extra printers, the family will be able to make around 150 face shields per day.

After hearing about the Warner’s service project, the Community Outreach Pastor at North Coast Church Fallbrook, where Stephanie is on staff, has agreed to take on communication, distribution, sanitization (onsite at the Vista campus), and pick up/delivery of the shields.

Stephanie said, “It’s been beautiful to see the good that has come from this. It’s been a light in these dark times.”

During this time of crisis nationwide and around the globe, Jesus Geeks and the Warners are encouraging individuals who are in a position to help to consider donating to the 3D face shield project. They can either donate the use of their 3D printer or resources to make face shields. A donation of $40 helps to make 150 face shields. For more information, email info@thejesusgeeks.org.