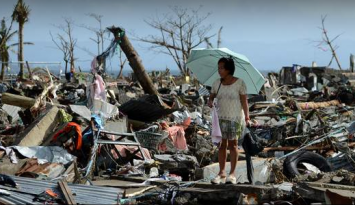 November 26, 2013 (San Diego)--Many Filipinos live and work in San Diego County.  Some of them have relatives back home in the Philippines who have been affected by the tragic typhoon Haiyan (which translates in English as typhoon Yolanda)  that hit a few weeks ago.

In an interview with East County Magazine, Rex Mortensen, a local recruiter with American Solar Direct, said he has several dozen family members in the hard-hit city of Tacloban, where he was born and raised until age 8.

“All but one of my family members have been found," he said, but added that "odds are not good” due to current conditions; all of their homes have been destroyed and their belongings are gone. “They are hungry, thirsty, severely injured and with only the clothes on their backs, are trekking up to Manila to relocate and live permanently with our aid.”

He shared a survival story of his cousin. “When the typhoon was at its peak and flooded their village literally neck deep, my cousin was able to find a Styrofoam debris floating on the water as it rushed by and put his 5-year-old son on there to keep both of them from drowning. He said if it wasn't for that, they both would not have survived because the water was rising quickly.”

He also had troubling news from his family members about some relief efforts.

“What I am hearing from them is very similar to the Haiti earthquake crisis with government corruption, not moving fast enough with aid, and the aid centers that are set up are pilfering from the survivors by charging for food, water, etc.

The impact is devastating emotionally and financially for us here in the US--not knowing where everyone was, the questions as to why help is not getting to them and needing to relocate so many of our family members out of the disaster that once was called home.” 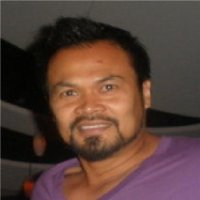 Mortenson (photo, right, by Jordan Schaffner) voiced frustration over aid results thus far and said it’s hard to know who to trust.  “What I would like to see is the government taking responsibility and doing what’s right for that region. It seems like more help is coming from foreign volunteers,” he observed.

Though he remains very skeptical about some aid efforts to help people in home country, he praised one local organization in Poway that anticipated this typhoon before it even hit land. The name of the organization is Gawad Kalinga Relief Operations for Typhoon Victims, www.scoop.it/t/yellow-boat-social-entrepreneurism/p/4009323736/2013/10/15/gawad-kalinga-leave-no-one-behind-gawad-kalinga-community-development-foundation-s-fundraiser-on-crowdrise. The Filipino relief organization is bringing food, water and medicine to the victims in the Philippines in the wake of the typhoon.

Gawad Kalinga USA is accepting donations to pay for 200,000 food packs that its’ affiliate in the Philippines intends to distribute in hard-hit areas. The packs -- which include rice, bottled water and canned goods -- can feed families for three or four days, according to the charity.

At a national level, the White House website lists several relief organizations offering help to survivors of the typhoon.  http://www.whitehouse.gov/typhoon

Super Typhoon Haiyan tore across the island of Samar, killing at least three people. The toll was expected climb as search efforts intensify.  Haiyan reportedly generated sustained winds of 195 mph, and gusts of up to 235 mph.

“If you can imagine what happened with Katrina -- at about 125 to 140 miles an hour -- these winds were surpassing 200 miles an hour, so you can see the devastation that's going to happen,'' Tony Olaes of Gawad Kalinga USA told 10News. ``We don't know how bad it is at this point.”

Olaes said that the power is out in many areas, but he's seen reports from people on Facebook of water 16 feet deep in some areas and winds that sounded like freight trains.

Resfina Macoy Torrevillas told NBC7/39 that she has been unable to reach her mother and sister in the central Philippines.

She said part of the region affected by the typhoon was struck by a 7.1 magnitude earthquake three weeks ago that killed 222 people.

``We have people living (in) tents because they lost their homes from the earthquake and the churches have been in ruins, too,'' she said. ``So, now, I think what we can do is pray for them, for their safety.''

Authorities said Haiyan might be the strongest ever tropical cyclone to make landfall.

Interestingly, Filipino climate negotiator, Naderev “Yeb” Sano at the United Nations Climate Convention in Warsaw has such strong convictions that this typhoon and a prior one in his homeland are caused by climate change influenced by human behavior that he is on a hunger strike. Others in the Warsaw Climate Convention have joined him as well.