By George Janczyn
November 7, 2011 (San Diego)--On October 20, USGS under contract with the City of San Diego began operations on a new deep monitoring well in the Chollas Creek vicinity near the intersection of Home Avenue and Federal Blvd. The well is the latest in a series of multiple-depth wells being drilled in selected areas of four coastal river basins for the San Diego Hydrogeology Project. 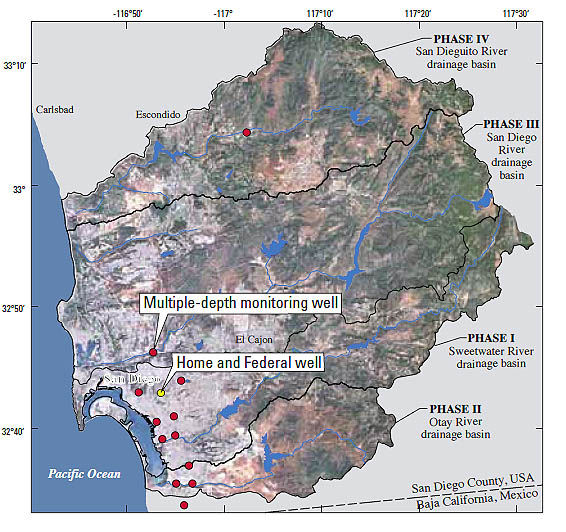 The primary objectives of the project are to develop an integrated, comprehensive understanding of the geology and hydrology of the San Diego area, focusing on the San Diego Formation and the overlying alluvial deposits, and use this understanding to evaluate expanded use of the alluvial deposits and the San Diego Formation for recharge and extraction.
Project Chief Wes Danskin writes about the latest developments:
November 1:
1. Hit the Otay formation, at 648 feet. Check out the photos of cuttings below; bet you can pick it out too. And we hit it within about 60 feet of where I thought.
And very pleased with my newest idea: poker chips to identify the formations; I can write on them, and they don’t dissolve or fly away like post-its.
The poker-picks you see here are: the San Diego formation identified via shells; and the Otay formation looks like Otay. Each square sample box is 10 feet of drilling. The rectangular boxes indicate where we took a core.
Photo 1 below is 0-240 feet. 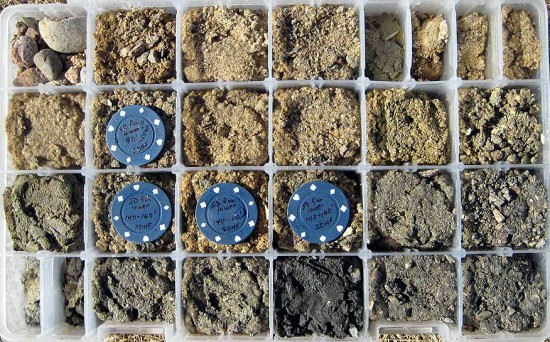 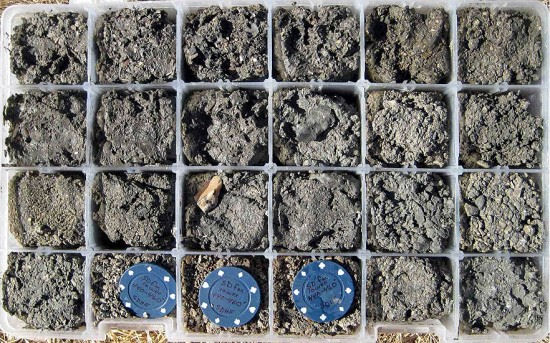 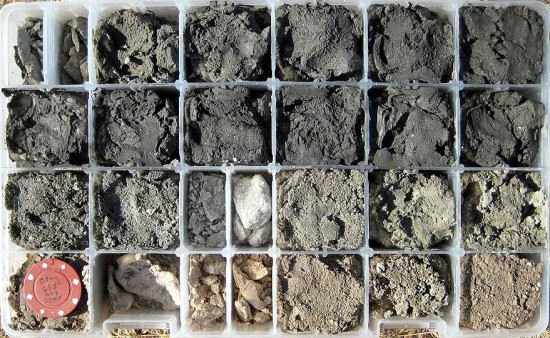 2. Got a visit by SDSU students on Wed afternoon, Nov. 2. Good time to stop by the drill site and check out what has been going on.
3. At 1070 feet, and I would like to say I know what we are in. Sometimes a mystery. I’d say probably in the Poway group, sand and cobbles. Will know more as we get deeper and later get geophysical logs and water quality.
In the graph below on drill times you can see the San Diego formation down to about 650 feet; then the sticky, slow-drilling Otay formation down to 850 or so; then into cobbles (Stadium Conglomerate?) at 1000 feet. 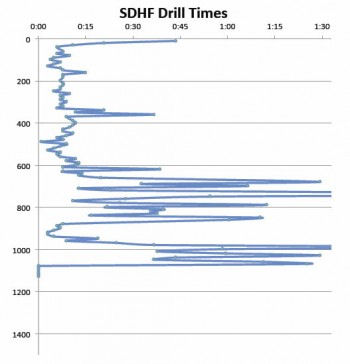 4. Electrical conductivity (salinity) below Otay is high (1500?), but I am curious about well yield. The conglomerates should yield water, maybe better than the lower San Diego Formation. 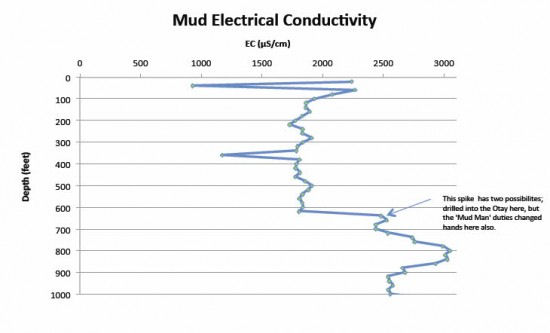 Good news is we are in conglomerates and the stratigraphy is becoming more predictable; bad news is we trashed a $7K drill bit on the cobbles.
Never an easy choice picking which bit to use. And it costs thousands of dollars to trip out to change to a different bit.
May not make it to 1500 feet; budget is going fast; but we’ve found out much of what I wanted to learn.
______________________________
November 4:
Check out the stratigraphic section below. Shown as schematic, but we are figuring out the coastal San Diego subsurface geology. The next section I’ll show you will be multiple wells drawn with an engineering scale.
Items in the photo:
SL = sea level changes, will influence where we place the piezometers because the recent draining of the continent probably has influenced groundwater chemistry.
Cores = where we collected a core. We’ll squeeze them, test the water obtained, and send them up to Menlo Park for further analysis.
Blue stickies = where we think we will place the piezometers; precise placement will be done after the final geophysical logs are run.
Strata = denoted by colors with formation names, e.g. Upper San Diego Formation. Being close to the outcrops in Mission Valley helps a bunch.
Cuttings (Wes) – Depth of formational contacts chosen by me via cuttings.
Elog (Tony) – Depth of formational contacts chosen by Tony Brown via cuttings and elogs. Should be better than mine. You get to see the value of elogs, which we have done during drilling. Will have a full set run when we reach bottom of well. 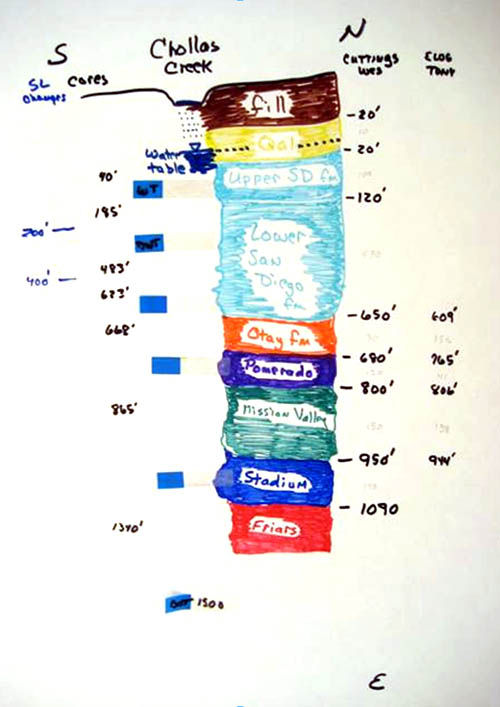 For earlier blog reports about the USGS Hydrogeology Project please see the Groundwater page (can also be found in the Topical Guide on the menu bar above).