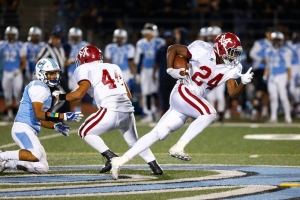 December 8, 2017 (San Diego) - The San Diego Hall of Champions has released their November Stars of the Month and a Monte Vista High football standout is on the list, as well as former and current SDSU football players and a Sockers player and former Poway High alumnus. 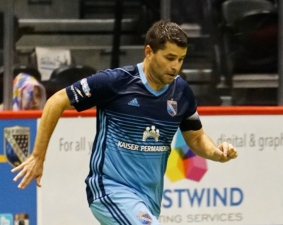 The Sockers’ captain and all-time leading scorer finished the month with 13 points on 10 goals and 3 assists to lead the team. He was tops in the Major Arena Soccer League in points, goals and game-winning goals (3). Chiles earned MASL honors for his four-goal performance against Tacoma.
Calvin Munson (below) - NY Giants, SDSU alumnus
It didn’t take the former Aztec long to make his impact with the Giants, topping it off with a 13-tackle game against the Kansas City Chiefs. The 6-foot, 241-pound rookie collected eight unassisted tackles in the 12-9 overtime victory. In three games for the month, Munson had 25 tackles. 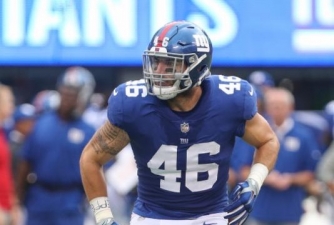 AMATEUR
Kyavha Tenzino - football, San Diego State
A sophomore linebacker, Tezino led the Aztecs to a perfect 3-0 record by totaling 32 tackles (next highest on the team was 20), six tackles for loss, two sacks, four quarterback hurries and a pass breakup. He helped limit SDSU opponents to averages of just 13.3 points, 49.7 yards rushing and 299 yards per game.
HIGH SCHOOL
Jahmon McClendon - football, Monte Vista
A bruising 6-foot-2, 210-pound running back, the junior led the Monarchs on a run to the section Division IV title game where he was a one-man wrecking crew, gaining 383 yards and scoring a section-record equaling 8 TDs.