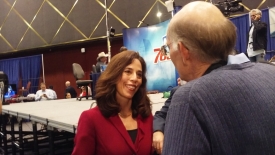 Republican Council members Mark Kersey and Scott Sherman also secured their seats with over 50% of the vote, as did Senate Chief of Staff Chris Ward in the race to succeed fellow Democrat Todd Gloria in District 3.The San Diego City Council Seats that continue into a November run-off are Districts 1 and 9. San Diego may also break one more glass ceiling in November, if Mara Elliott is elected as the first woman City Attorney.