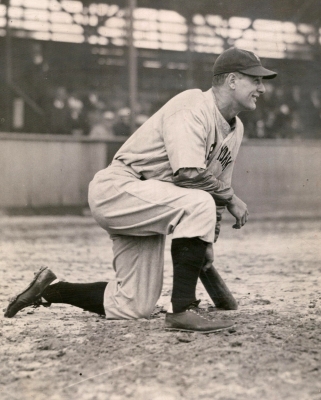 “It’s great to have baseball step up to the plate for the inaugural Lou Gehrig Day, but the Padres have embraced our chapter for the past several seasons with fantastic recognition and support,” said Steve Becvar, executive director, ALS Association Greater San Diego Chapter.

“With a few simple words, Lou Gehrig inspired a nation with his courage. We’re very grateful to everyone who joins us in our vision to create a world without ALS. Our mission is to discover treatments and a cure and empower people affected by ALS to live their lives to the fullest.”

On Thursday evening at Petco Park, in the main concourse area behind home plate, ALS Association officials will staff a kiosk and distribute educational information about ALS, or amyotrophic lateral sclerosis, a progressive neurological disease named after the New York Yankee baseball player who set a record of 2,130 consecutive games played.

Before the Padres game, retired San Diego State University basketball coach Steve Fisher will throw out the ceremonial first pitch. Fisher’s son Mark, who serves in a basketball coaching role at SDSU, was diagnosed with ALS in 2011.

Also at Petco Park, four ALS logos will be on display to mark Gehrig’s No. 4. In addition, Padres players, managers and coaches will wear at Lou Gehrig Day patch on uniforms and may use red “4-ALS” wristbands (in a game played June 2 in Chicago, the Padres' Manny Machado elected to honor Gehrig by putting his image on his elbow guard or wristbands).

Also during the June 3 game, Becvar said ALS awareness messages, including Gehrig's famous "Luckiest Man" speech, which will be shown on Petco’s video boards. Also, a local family affected by ALS will serve as the celebrity bell-ringer of a 700-pound mission bell located down the left-field line adjacent to the Western Metal Supply Co. building.

According to Becvar, medical expenses associated with ALS, including medical equipment, programs and services, can cost up to $250,000 annually, depleting families’ life savings. All services for patients and families are provided by the ALS Chapter at no charge.

In addition, the Chapter also maintains a 2,500-square-foot storage facility, referred to as a loan closet, with hospital beds, scooters and other durable medical equipment provided to ALS patients and families at no charge.

“We’re grateful for the community’s support to the people, families, and caregivers affected by this progressive and terminal disease, which takes away the ability to walk, dress, write, speak, eat and breathe,” said Becvar. “Every 90 minutes someone is diagnosed with ALS, and every 90 minutes someone loses their battle to this fatal disease. Together and by teaming up, we’re going to create a world without ALS.”

Becvar added that Valley View Casino, a longtime supporter of the ALS Associaton Greater San Diego Chapter, will host a Lou Gehrig’s Day Watch Party from 6 to 9 p.m. Cost of $20 includes a dinner meal, drinks and admission to watch the Padres vs. Mets game on one of the casino’s 75-inch TVs.

MLB announced in March it would hold its first-ever Lou Gehrig Day to honor the Iron Horse’s magnificent career and to help raise awareness and funding for the disease. Some MLB teams marked Lou Gehrig Day on Wednesday, June 2. Teams that were off or played on the road are expected to observe Lou Gehrig Day on Thursday, June 3, while a couple of teams are planning festivities a few days later.

June 2 marked the 96th anniversary of when Gehrig started at first base for the New York Yankees in place of Wally Pipp, starting his record streak of 2,130 consecutive games played. The mark stood until September 1995, when it was broken by Baltimore’s Cal Ripken Jr., who played 2,632 consecutive games in a streak that ended in 1998.

June 2 also is the day for Gehrig’s death from ALS at age 37 in 1941 He was elected to baseball’s Hall of Fame in 1939, months after his abrupt retirement. From 1925 to 1938, Gehrig was one of the best and most durable players in baseball.

The Greater San Diego Chapter, chartered in February 2013, is one of 39 chapters nationwide. The San Diego chapter works closely with the ALS San Diego Clinic at the University of California San Diego, which has been certified as a Center of Excellence by the national ALS organization. At its San Diego offices, the local chapter also showcases an ALS bedroom and bathroom that is equipped with features and benefits that would be helpful to people with ALS. For more information about the ALS Association Greater San Diego Chapter, visit www.alsasd.org.