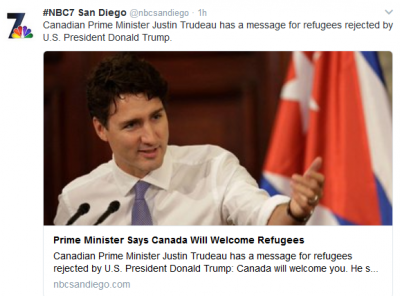 Protest planned at 5 p.m. tonight at Lindbergh Field; immigrant attorneys warn demonstrators could be detained, caution non-citizens not to participate due to “grave” risks

January 29, 2017 (San Diego)—Multiple federal courts have issued orders temporarily blocking deportation of  legal residents detained at airports following President Trump’s executive order Friday, including a New York federal judge ruling on an ACLU suit that applies nationwide. While some remain detained and denied access to counsel per the ACLU, others were allowed to meet with immigration attorneys  and were soon set free at airports across the U.S., where large crowds gathered and greeted the arriving immigrants with cheers to welcome them to America (View video).

The court orders thus far protect only those already at U.S. airports or in transit. Other lawsuits are set to be filed Monday by civil rights and Arab-American groups seeking to overturn as unconstitutional the broader ban on admitting refugees as from seven mostly Muslim nations (Iraq, Iran, Sudan, Somalia, Syria, Syria, Libya and Yemen)  listed as countries of concern by the State Department.

The order also applies to  an estimated half million legal U.S. residents with green cards from those countries, as well as people who hold dual citizen in any of the seven nations as well as citizenship in U.S. ally nations including Canada and Great Britain.