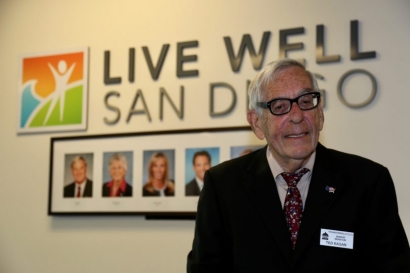 March 25, 2019 (San Diego) - Have you ever had ambitions to run for office but found the prospect of lawn signs, advertising and public appearances daunting?

If you’re a San Diego County resident over the age of 55, you can still fulfill your political aspirations without the rigors of a major campaign. The California Senior Legislature offers older adults the opportunity to advance issues important to them and advocate for legislation at the state level.

The Senior Legislature is set up as a mirror image of the actual California Legislature. There are 40 senior senators and 80 senior assembly members elected to represent the seniors in the various aging agency jurisdictions across the state.

Older adults interested in running need to gather the signatures of 25 eligible voters over the age of 55, sign a statement of commitment and the CSL Code of Ethics, and submit a biographical statement.

If more than two people submit applications, an election will be held at the monthly Aging & Independence Services Advisory Council meeting on May 13, where Council members will vote to determine the new representatives.

“It’s exciting to do something that’s worthwhile and beneficial,” said Ted Kagan, one of San Diego’s two senators in the CSL. “That’s what got me into it. Trying to make things a little bit better.”

The senior legislators meet annually every November in Sacramento. Proposals are brought forth from members across the state and the group whittles them down to 10 top proposals to hopefully become legislation in the state legislature.

Kagan said it takes some effort to get your ideas onto the list of final proposals.

Senior legislators often spend all year working on their proposed legislation. The local representatives meet bi-monthly at the AIS offices in Kearny Mesa and formulate their priorities and strategy before the annual meeting.

Part of that, Kagan said, is identifying which state legislators share your issues as their priorities. That makes it more likely that you’ll find someone interested in taking your proposal and making it into actual legislation.

Local seniors have worked on education for adults, caretaking, public transportation and veterans issues, among others.

One of Kagan’s proposals from last November’s CSL session is making its way through the current state legislative session. He proposed giving veterans preference for housing assistance.

SB725, sponsored by Senator Susan Rubio (D-West Covina) would require the Department of Veterans Affairs to establish a rental housing assistance program to provide financial assistance to veterans, based on the needs of the veteran.

“You look for shortcomings, and now at least I’m in a position to try to do something about them,” said Kagan.

For next year’s session, Kagan is working on a proposal that would make local bus passes for seniors and veterans valid across the state. Instead of having to purchase a pass or pay a fare when you’re in a different California jurisdiction, your hometown bus pass would become a statewide public transportation pass.

“It’s fun seeing all your efforts,” he said. “You look for ways to enhance your life and find a purpose for getting out of bed in the morning and CSL seemed to fit right into that package for me.”

The positions are voluntary, but members get their transportation and hotel paid for to attend the annual legislative session. The program is funded through donations. California residents can donate either by making a tax-deductible contribution on their state tax forms or by becoming a Friend of CSL at www.4csl.org.

If you are interested in becoming a senior legislator, you can learn more at www.4csl.org. Election packets are available by calling 858-505-6541, emailing Renee.Sherrill@sdcounty.ca.gov or coming in person to the AIS offices, 5560 Overland Ave., Suite 310, San Diego.  Completed packets are due no later than March 29 to Renee.Sherrill@sdcounty.ca.gov or may be dropped off at the AIS offices.