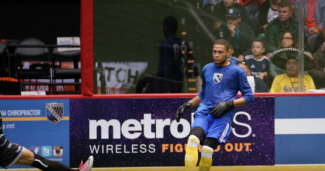 Chris Toth makes 15 saves and records third win of the season; eight different Sockers score goals as team moves to 6-0 on the season

Sonora stared the game with an early goal by Erick Rosas at 1:59. However, less than a minute later Eddie Velez tallied his first goal of the season to tie the game at 1-1. Hiram Ruiz scored off a pass from Erick Tovar to put San Diego up for good at the 5:31 mark of the first. The Sockers extended their lead to three on goals from Brian Farber and Matt Clare to end the period at 4-1. In the second period, Sonora cut the lead in half on a goal by Franck Tayou.

Both teams added two goals each in the third period. The Sockers struck for their goals in the middle of the quarter. Kraig Chiles raised his point streak to six games with a power-play goal, and Brandon Escoto found the back of the net off a helper from Ze Roberto. Chiles leads the team with 13 goals and 18 points.

Chris Toth made 15 saves during the game and several big saves in the fourth to maintain the Sockers lead. The Soles made the crowd uneasy when they scored 1:54 into the final period, but San Diego responded only 17 seconds later when Tovar notched his first goal of the game. Cesar Cerda added an empty-net goal to ice the game.

The Sockers will play the Turlock Express at Valley View Casino Center on Sunday, December 17 at 5:05 p.m.