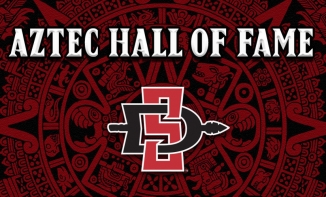 SDSU will officially induct the group of legends at a luncheon at the Payne Parma Goodall Alumni Center on Saturday, Sept. 16 and the 2017 class will be honored later that evening at halftime of SDSU’s home football game against Stanford, set to kick off at 7:30 p.m. PT.

Since its inception in 1988, the Aztec Hall of Fame has honored 143 individuals and six teams (not including this year’s inductees), welcoming a new group of legends each year through 1999. Inductions encountered a two-year hiatus while the Aztec Athletics Center (now Fowler Athletics Center) underwent renovations. Inductions resumed in 2002 once construction was completed and the permanent home of the Hall of Fame was established.

Tickets for the Aztec-Cardinal game are available now at the Aztec Ticket Office at (619) 283-7378, or at GoAztecs.com For more information about the Aztec Hall of Fame induction ceremony, please contact the Aztec Club at (619) 594-6444.

Below is a quick look at the newest class of the Aztec Hall of Fame:

Head coach of the Aztecs for 18 seasons, arriving for the 1999-2000 season and guiding SDSU to a Mountain West-record 10 conference titles, eight NCAA tournaments and 13 postseason appearances, before retiring in April 2017… Had an Aztec career record of 386-209 and finished as the school’s all-time winningest coach… Earned his second national coach-of-the-year award in 2011 (Naismith, NABC, Adolph Rupp)… Led San Diego State to its first Division I NCAA tournament win in 2011 when it reached the Sweet 16 and finished with a school-record 34 victories (34-3)… A recipient of the 2015 John R. Wooden Legends of Coaching Award, he ushered the Aztecs back to the NCAA Sweet 16 in 2014 when they turned in a 31-5 record… Helped the program to its first top-25 ranking in 2011 when it opened at No. 25 in the preseason poll and peaked as high as No. 4.

Won the 2012 NCAA title in the discus throw, becoming SDSU’s fourth individual champion (at the time) and first since 1985… Is the school-record holder in the outdoor discus throw and hammer throw, and the indoor shot put… Was a three-time first-team All-American (2011-12 discus, 2012 indoor shot put) and a one-time second-team All-American (2012 outdoor shot put)… Four-time MW outdoor track and field champion (2011-12 discus, 2011-12 shot put) and the 2012 indoor shot put champion… Was a six-time all-MW pick and captured the High Point Meet Award at the 2011 MW Outdoor Championships… 2016 U.S. Olympic Trials champion in the discus throw and participant at the 2016 Rio Olympics… Two-time participant at the World Championships (2013 and 2015) in the discus, and participant at the 2012 U.S. Olympic Trials.

Was 14-5-1 over his two seasons as the Aztec quarterback from 1974-75, posting the third-best winning percentage (.725) in school history and leading SDSU to a 1974 PCAA title… Led the nation with 2,660 yards passing in 1975 en route to being named a first-team All-American by both Sporting News and Time Magazine, and honorable-mention All-America accolades by both the AP and UPI… Also garnered first-team All-Coast and All-PCAA accolades in 1975… Also played in the East-West Shrine Game, College All-Star Game, the Blue-Gray Game and was MVP of the Senior Bowl in 1975… Was a fourth-round draft choice by Denver in 1976 and played four years for the Broncos and one season for the Jets… Saw action in Super Bowl XII for Denver.

Is the all-time leading tackler in school history (407)… Was a four-year starter for the Aztecs, leading the program to a 36-7-1 record over this career… Led the team in tackles in 1976 and 1977 as the 139 stops in 1977 rank as the fourth most in SDSU single-season history, while the 125 tackles in 1976 are tied for the eighth most… Captained the 1977 squad and earned the team’s Hardy/Peterson Memorial Trophy… Played in the 1977 East-West All-Star Game… Was drafted by the Minnesota Vikings in the third round.