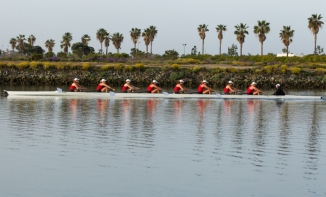 October 30, 2016 (San Diego) - The San Diego State rowing team competed in its first event of fall schedule on Sunday at the Race for the Cure, hosted by UCSD, which raised money for breast cancer research. The Aztecs faced host UCSD, USD, Orange Coast College (OCC) and ZLAC Rowing Club in their races.

Eight SDSU boats participated in the regatta at Mission Bay where SDSU finished each race with at least one boat in the top three. The Aztecs saw several freshman crew members compete in the three races, with six freshman in the top two eights.

The races began at 7:40 a.m. with the open eight, where the Aztecs’ ‘A’ boat finished in second (12:28) immediately followed by SDSU’s ‘B’ boat finishing in third with a time of 12 minutes, 42 seconds. SDSU ‘C’ also competed in the open eight, coming in eighth place at 13 minutes, 43 seconds.

The second race of the day for the Aztecs was the novice eight, which began at 8 a.m. SDSU ‘A’ claimed a victory, with a first place finish time of 13:42, while SDSU ‘B” came in second, logging a time of 15 minutes, 29 seconds.

In the final event for SDSU, the Aztecs finished within the top six spots of a 10-boat open four race. The SDSU crews finished in second, fourth and sixth, with SDSU ‘A’ coming in second (13:45), SDSU ‘C’ finishing in fourth (14:07) and SDSU ‘B’ closely behind in sixth place at 14:16.

San Diego State will get back on the water on Nov. 5-6 in Sarasota, Fla., for the Sarasota-Bradenton Chase Race, and return to Mission Bay on Sunday, Nov. 13, for the San Diego Fall Classic.

Row for the Cure