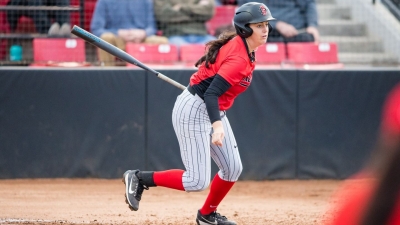 Starting Aztec (4-3) pitcher Maggie Balint and Cougar (3-2) pitcher Arissa Paulson combined for 18 strikeouts and just six hits allowed for teams that have combined to win 13 of the 20 MW regular-season championships in the history of the league.

Balint (0-2) tossed 4 2/3 innings of hitless ball before Rylee Jensen-McFarland’s two-out single in the top of the fifth scored Kaylee Erickson. Erickson had walked and moved to second on a sacrifice bunt before the single to left proved to be the game-winning hit.

BYU tacked on two runs in the seventh as Jensen-McFarland homered over the right-field fence and, after Karina Faasisila replaced Balint in the circle, a Paulson single scored Taylei Williams.

On the other side, SDSU managed just one hit - a Taylor Adams one-out single in the fourth - and one walk - an Adams walk in the first against Paulson (1-0). Paulson struck out nine for the game and induced a pair of inning-ending double plays.

1B Taylor Adams has reached base safely in all seven games this season.

The Aztecs continue their play in the 30th annual Campbell/Cartier Classic Friday with a doubleheader, beginning at 4:30 p.m. against Southern Utah and 7 p.m. vs. Cal State Fullerton. The first 100 fans for the CSF game will receive free pink t-shirts.