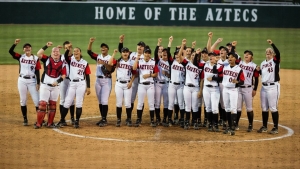 The Aztecs, who have won a league-best seven Mountain West titles in the 20-year history of the league, are scheduled to play 17 contests against teams that made last year’s NCAA tournament, including a Feb. 29 home game against defending national champion UCLA. Additionally, SDSU will play nine games against conference champions.

San Diego State begins its season on the road for the 13th straight year, playing at Jacksonville’s River City Leadoff Tournament from Feb. 6-8 in Jacksonville, Fla. The Aztecs open with host Jacksonville on Thursday, and play doubleheaders against Villanova and Nicholls on both Friday and Saturday.

Following a road game at UC Riverside on Wednesday, Feb. 12, SDSU opens its home portion of the 2020 slate with the 30th annual Campbell/Cartier Classic from Feb. 13-15. San Diego State will play NCAA tournament teams and conference champions Brigham Young twice (Thursday and Saturday) and Cal State Fullerton on Friday. The Aztecs also will meet Southern Utah on Friday and Saturday.

Before heading to the always competitive Mary Nutter Collegiate Classic from Feb. 20-22, SDSU welcomes Loyola Marymount on Tuesday, Feb. 18. At the MNCC, San Diego State is slated to play four teams that made the NCAA tournament, including Notre Dame on Thursday, Women’s College World Series qualifier Arizona and Wisconsin on Friday, and Mississippi State on Saturday. The Aztecs also play Idaho State on Thursday.

After a visit to California Baptist on Wednesday, Feb. 26, SDSU co-hosts the San Diego Classic. On the docket for San Diego State in the classic is NCAA tournament qualifier Weber State on Friday, St. John’s and defending NCAA champion UCLA on Saturday, and CSUN on Sunday.

The Aztecs wrap up their five-game homestand on Wednesday, March 4 against Villanova before heading to the Louisville Slugger Classic, co-hosted by Long Beach State and UCLA. SDSU will play Cal State Fullerton for a second time on the season on Friday, Cal Poly and NCAA tournament qualifier Boston Univ. on Saturday, and UCF and host Long Beach State on Sunday.

San Diego State kicks off Mountain West play at home from March 13-15 against defending MW champion Colorado State before traveling to Fresno State for a weekend series from March 20-22.

Breaking up the beginning of league play is an exhibition game against the Mexican Olympic Team on Tuesday, March 24 at 7 p.m. at SDSU Softball Stadium.

SDSU returns to official action from March 27-29 with a home series against Nevada, followed by a road trip to UNLV from April 3-5.

Next up for San Diego State is a weekend home series with Boise State from April 9-11 and its final non-conference game of the season on Wednesday, April 22 against San Diego at home.

The NCAA Regional kicks off postseason play from May 14-17 at 16 campus sites.

SDSU is coming off a 25-26 season, but welcomes the fourth-best transfer recruiting class in the country, according to Softball America.