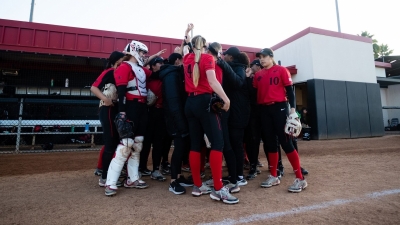 The Aztecs, who have won a league-best seven Mountain West titles, are scheduled to play 11 games against teams that made last year’s NCAA tournament and four conference champions.

SDSU begins its season at home for the first time since 2007 when it plays host to the SDSU Season Kickoff from Feb. 10-13. San Diego State opens with Middle Tennessee on Thursday, followed by games against 2021 NCAA tournament teams UIC (Horizon League champion) and Stanford on Friday, UIC once again on Saturday and Cal Poly on Sunday.

The Aztecs continue their 11-game homestand to open the season on Feb. 16 vs. San Diego.

The Aztecs then head to the always competitive Mary Nutter Collegiate Classic from Feb 24-26, which will take place at Big League Dreams Park in the Palm Springs area in Cathedral City, California. SDSU is slated to play three teams that made the NCAA tournament a year ago, including Northwestern and Washington on Saturday, and Missouri on Sunday. San Diego State opens the weekend with Friday night games against Cal State Fullerton and UC Davis.

The Aztecs return to America’s Finest City to host the San Diego Classic from March 3-6 along with USD and UC San Diego. SDSU will take on a pair of conference champions and NCAA tournament qualifiers in Brigham Young (Thursday) and Boston Univ. (Friday), along with California (Friday), Yale (Saturday) and Stony Brook (Sunday).

San Diego State wraps up its regular-season tournament play from March 10-13 at the Torero Classic, hosted by San Diego. The Aztecs are scheduled for games against the Toreros on Thursday, Valparaiso and Weber State on Friday, Weber State again on Saturday and CSUN for a second time this season on Sunday.

SDSU kicks off Mountain West play at home against Colorado State on March 19-20 before traveling to Fresno State for a series from March 25-27.

San Diego State follows with a home series against Nevada from April 1-3 and then a road trip to UNLV from April 8-10.

Next up for the Aztecs is a weekend home series with Boise State from April 14-16 and its final non-conference game of the season on April 20 at UC San Diego.

The NCAA Regional kicks off postseason play from May 19-22 at 16 campus sites.

Last year, San Diego State finished with a 28-16 record, its best winning percentage (.636) since the 2015 squad went 38-20 (.655) before falling in the NCAA Los Angeles Regional final to UCLA. It was also the ninth-best record in program history.