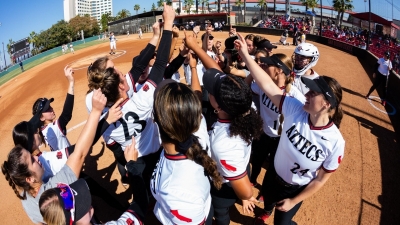 SDSU quickly loaded the bases in the bottom of the first inning on infield singles by Bella Espinoza and Jillian Celis, and a hit by pitch by Jessica Cordola. Barbara then took the first pitch she saw well over the right-field wall for the grand slam. It was the 12th home run of the season and first grand slam for Barbara, who later drew two walks on eight pitches.

San Diego State then added seven runs in the second with two outs off just three hits. The Aztecs first had a double steal with Espinoza stealing second and Alexa Schultz running home immediately on the throw. Espinoza later scored on a bases loaded walk to Nicole Siess. Makena Brocki followed with a two-run single before Adams cleared the bases with a three-run homer well over the center-field fence.

SDSU added a pair of insurance runs in the fourth when Brocki singled in Elianna Reyes and later scored on a sacrifice fly by Adams.

The offense was plenty for the 1-2 punch of Light (3-1) and Martinez. Light gave up no hits and one walk in three innings as the starter, striking out four. Martinez allowed one hit - an infield single by Makenna McVay with one out in the fifth - and struck out two in two innings of relief.

The Aztecs threw their fourth one-hitter of the season and 37th in recorded history (since 2000).

SDSU plays a weekend series at Fresno State with games scheduled for 6 p.m. on Friday, 3 p.m. on Saturday and noon on Sunday.