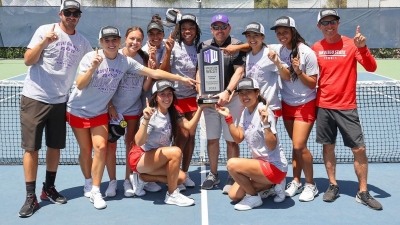 April 30, 2022 (Tucson) - San Diego State is advancing to the NCAA Team Women’s Championship for the 23rd time in school history. The third-seeded Aztecs completed a dominant run through the Mountain West Conference tournament on Saturday, defeating fourth-seeded UNLV 4-1 to claim the program’s first league tournament title since 2003. With the win, the Aztecs earn an automatic bid into the NCAA team tournament.

In three matches in the event, the Aztecs (17-6) outscored the opposition 12-2 and did not lose a singles point in any of the victories over Wyoming, Colorado State and UNLV (19-6).

“We are very excited,” San Diego State head coach Peter Mattera said. “The team fought, fought, fought. To our credit we were good enough to come back. We started quickly in singles and our confidence spread like a wildfire. We fed off each other. The team felt like it was our title to win. It was just a tremendous effort by this team.”

Five of the six players singles for the Aztecs recorded at least two victories with senior Alicia Melosch posting wins in the number five position all three days.

“Everyone contributed this entire event,” Mattera said. “Melosch was rock solid again. (Julia) Arnold played one of their better points at number two and won. Bunyawi (Thamchaiwat) was not feeling perfect but she played very well and very confident. It is so fitting that Nnena (Nadozie) got to clinch the match. I could not be happier for her.”

In San Diego State’s 4-3 victory over UNLV back on April 15, the Aztecs lost the doubles point and had to win four of the six singles matches to come away with the victory. The same was true today.

“There was a time earlier this year we were almost automatic in doubles,” Mattera said. “To be able to come back again today speaks to our overall team depth and our confidence regardless of who we are playing and what the situation is. They believe in themselves and each other. We were down 1-0, just like yesterday, and to go out after a five-minute break and not let it bother you. We were determined. We wanted the conference title. We wanted to go the NCAAs. We were not going to let being down 1-0 bother them.”

San Diego State needed little more than an hour to draw even. That is how long it took Thamchaiwat to close out Helgesson 6-1, 6-4 on court number one. The Aztec senior, currently ranked 78th nationally, improved to 13-0 on the dual season with the win in which she lost a total of five points in racing out to a 5-0 lead in the first set.

An all-conference selection in both singles and doubles and the top-rated Mountain West player by the ITA in both categories, Thamchaiwat faced all of three break points in 17 games Saturday. Her victory on court one tied the score at one.

The Aztecs next three victories came in rapid succession. Next off on court five was Melosch. The senior won her third match in as many days, disposing of Aher 6-1, 6-4. Melosch improved to 14-4 on the season, with the 14 victories tied for the team high. She also gave the Aztecs a ninth consecutive win at No. 5 singles with the last loss in that slot back on March 7.

Senior Tamara Arnold recorded team point number three, with a 6-1, 7-5 win against Kovacs. After breezing through the first set, Arnold, also an all-conference performer in both singles and doubles, found herself down 5-2 in the second set. The senior rallied to win five straight games, breaking Kovacs twice in the process, and fought off set points in two games. Arnold picked up her 14th victory of the season.

Moments later, the Aztecs had their championship with Nadozie’s 6-4, 6-2 win on court three against Asano. Sensing victory, the senior dialed up the pressure, dropping just one point in the final two games of the match.

Entering the season, the Aztecs had lost six consecutive matches against the Rebels. That was before SDSU defeated UNLV twice this season, both on neutral courts.

San Diego will learn its NCAA tournament draw on Monday at 3:30 p.m. when the organization will stream the team selection show. The Aztecs will be making their 23rd all-time appearance in the Division I championship but first since 2013. The NCAA will announce the singles and doubles brackets on Tuesday.

“Seeing your name on the screen is something you never forget,” Matter said. “I am so happy that this team will have that experience. This group deserves it. Through the injuries and all of the ups and down they have continued to work. I am so proud they will experience that moment. Years from now they may forget some of the match results, but they will never forget the moment when San Diego State appears on the screen. It is a big cherry on the season and I am excited for them.”