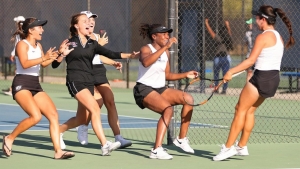 April 29, 2022 (Tucson) - The San Diego State women’s tennis team won four consecutive singles matches on Friday afternoon to defeat Colorado State 4-1 in the semifinal round of the Mountain West Conference tournament. With the victory over the second-seeded Rams, the third-seeded Aztecs will face fourth-seeded UNLV in the championship match tomorrow at 11 a.m.

San Diego State, which snapped Colorado State’s five-match winning streak, is in the championship match for the second consecutive conference tournament (the Aztecs advanced to the 2019 title match and there was no league tournament event due to COVID in either 2020 or 2021). The Aztecs are looking for their first tournament championship since 2003.

“It was an exciting college tennis match,” San Diego State head coach Peter Matera said. “We got off to a very good start in the doubles and we did not slam the door shut and to their credit, Colorado State came back on both courts two and three. They raised their energy level.

“The good news is after losing the doubles point, to our credit, we did not let it bother us. Before we started singles we talked about every match was winnable and we only needed four. We were very tough and fed off each other emotionally.

“This is what we play for. Championship Saturday.”

San Diego State dropped the doubles point for just the eighth time this season and entered today with a 2-5 record in matches where it has lost the point. The Aztecs have shown an uncanny ability to score points at the bottom of the lineup and that proved to be true once again on Friday.

“We know we are a very good team and we are deep but that could have been such an emotional downer,” Mattera said of the outcome in doubles. “It speaks to the quality of this team to come out and play well immediately. We did a really good job in the first several games of all of the singles matches. It speaks to the group of players we have.”

Senior Alicia Melosch gave the Aztecs its first point at number five singles, improving SDSU to 7-0 in that position since March 12 and junior Julia Jordan clinched the match with a gutsy tiebreaker victory, marking the fourth straight win at the No. 6 position.

San Diego State won the regular-season match 4-2 back on April 10. That day, the Aztecs benefitted from claiming he doubles point. It was apparent early that SDSU would have to take another path to victory.

At number one doubles, SDSU’s top pair of Bunyawi Thamchaiwat and Tamara Arnold bounced back from a rare loss yesterday in the quarterfinals to defeat Somer Dalla Bona and Sarka Richterova 6-0. The Aztec duo, ranked 85th nationally, improved to 14-3 in the dual season.

Colorado State evened the doubles point with a win on court three. The Rams tandem of Tracy Guo and Lucia Natal got past Melosch and Cécile Morin 6-4. The Aztecs had a break in the fourth game and built a 4-1 advantage before the Rams were able to reverse course and close out the match by winning the final five games. Leading 4-1, the Aztecs were up 30-0 on CSU’s serve but were unable to close out that game, which started the Rams comeback.

The Rams won the doubles point by pulling out a win in a tremendous match on court two. It was Radka Buzkova and Matea Mihaljevic outlasting Nnena Nadozie and Regina Pitts 7-6 (4). In an odd match with remarkable momentum swings, SDSU built a 4-1 advantage, only to fall behind 6-5. However, for the second consecutive day Nadozie and Pitts broke serve to take the match to a tiebreaker. In the extra session, the Aztecs scored the first four points before Colorado State responded with the next seven points to close out the match and take the team point.

San Diego State regrouped from the disappointment of the doubles outcome, to win the first set on five of the six singles courts.

The Aztecs tied the team score at a point apiece with Melosch disposing of Mihaljevic 6-2, 6-1. Melosch won six consecutive games during a span in which she closed out the first set and took control of the second set. The senior, who was broken just once on her serve Friday, has been incredibly valuable the last half of the campaign won for the seventh time in her last nine decisions and for the second time in as many days.

“Alicia has been fantastic all year,” Mateera said. “She has been so rock solid and again today she was dominant, and it was important to get that first point and gave us that lift. The rest of the team really responded.”

The score remained tied at one for a while, until SDSU closed out a pair of matches within moments of one another.

On court three, Nadozie recorded a 6-2, 6-3 win over Richterova. The senior recorded her 11th victory of the dual campaign, in large part because she was able to fight off eight of Richterova’s nine break opportunities.

Just after taking the team lead, SDSU pushed the advantage to 3-1 when Arnold, who due to injury had not won a singles match since April 9, defeated Dalla Bona 6-2, 7-5. Despite being sidelined for several matches down the stretch, the victory was the senior’s team-leading 13th of the campaign. Arnold trailed 5-3 in the second set but won four consecutive games and broke Dalla Bona twice during that stretch to make sure the match ended in two sets.

That set the table for Jordan to close out the match on No. 6. After taking the first set 6-3, the junior needed to pull out a 7-6 (4) second set. Jordan trailed 6-5 in the second, but held serve to force the tiebreaker. After falling behind 2-0 in the extra set, she ran off five consecutive points to take control. With injuries in the lineup, Jordan has come on and has now won five consecutive decisions and is unbeaten in her last 11 matches.

“Jordan doesn’t play doubles and has to work her way into the singles match which is hard for anyone. She played so tough in the tiebreaker and she knew the team had three points and that she was playing for the match. That makes her play in the tiebreaker that much more impressive.”

San Diego State will face fourth-seeded UNLV (19-5 overall; 7-3 Mountain West) in the championship match tomorrow at 11 a.m.  The Aztecs won the regular season neutral site meeting between the teams, 4-3, on April 15 in Reno. Playing without Arnold, who missed the match with an injury, SDSU won three, three-set singles matches to claim its first victory over the Rebels since 2015.