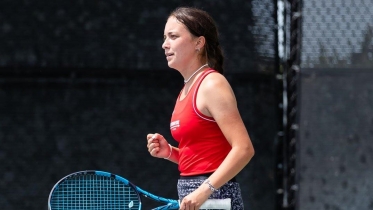 April 15, 2022 (Reno) -  Cécile Morin, Regina Pitts and Bunyawi Thamchaiwat all won three-set singles matches, the first two rallying-from a set down, to propel San Diego State to a 4-3 come-from-behind victory against UNLV at the McArthur Tennis Center on the University of Nevada campus Friday.

Playing without Tamara Arnold due to injury, SDSU overcame losing the doubles point and the first set in four of six singles matches to win for the eighth time in its last nine matches. With the neutral site conference victory, San Diego State improved to 14-5 overall and 6-1 in Mountain West play while UNLV fell to 15-5 and 5-3.

On a cold, windy day near the eastern slope of the Sierra Mountains, the Aztecs were able to keep their hold on second place in the conference standings despite playing without one of its top players for the third time in its last five matches. With Arnold unavailable, the Aztecs were without their co-leader in singles wins this season (12) and one-half of its nationally-ranked doubles duo.

Nonetheless, SDSU rallied after losing the doubles point and won singles matches at No. 1, 3, 5 and 6 positions to defeat the Rebels for the first time since 2015.

“This was a great college tennis match in extremely difficult conditions against a really tough opponent,” San Diego State head coach Peter Mattera said. “I am proud of how hard we competed. Being a player down, it took a great effort to come away with a victory today and that will help us as we get ready for the final week of the regular season and the conference tournament later this month.”

The Rebels rallied to win the other two doubles matches. On court three, Salsa Aher and CoCo Zhao got past Alicia Melosch and Morin 6-3. On court two, the Rebels secured the double point when Izumi Asano and Cindy Hu disposed of Nnena Nadozie and Julie Jordan 6-4.

The teams split the first two singles matches. San Diego State tied the team score at one, when Jordan defeated Sher 6-0, 6-4 on court five. The victory pushed the junior’s win streak to three matches, and she is unbeaten in her last eight singles matches.

Moments later, the Rebels regained the team lead, with Kovacs winning over Nadozie 6-3, 6-3 on court two. The senior, who typically plays number three singles but moved up a position in Arnold’s absence, is 10-6 in the dual season.

The other four singles matches went to three sets, with the Aztecs needing to win three of those matches to claim the team win.

San Diego State tied the match at two with a victory on court six. Morin, playing singles for just the third time in SDSU’s last nine matches, posted her first victory since opening day (Jan. 21), with a 3-6, 6-3, 6-4 victory over Zhao.

“The bottom of the lineup came up clutch today,” Mattera said. ”Cécile changed her pattern after the first set and played really well and with great confidence in sets two and three. Obviously, every point was crucial today and it was great to see her come through.”

The Aztecs took their first lead of the afternoon with Pitts storming back to win at No. 3 6-7, 6-1, 6-4 against Asano. The senior has won four straight decisions and is unbeaten in her last seven singles matches. The result gave San Diego State a 3-2 lead.

It was UNLV’s turn to tie the match, with Hu defeating Melosch 6-4, 5-7, 6-3 on court four. The loss snapped an impressive seven-match win streak for the senior, who is now 12-3 in dual competition.

Fittingly, the match came down to court one and Thamchaiwat. With the other matches completed, the top players from each school had the courts to themselves for much of the third set. The senior transfer who has anchored SDSU’s lineup throughout the season stood large once again, defeating Helgesson 7-5, 5-7, 6-3.

“It is challenging to play for the match with everyone watching,” Mattera said. “Bunyawi has had a wonderful semester and you have to give her credit to take her game to that level and secure the victory for the team today.”

Thamchaiwat, ranked 74th nationally by the ITA, improved to 11-0 in dual action with the three-set winner.

San Diego State is back in action tomorrow against Nevada. Match time is set for 11 a.m. in Reno, Nevada.