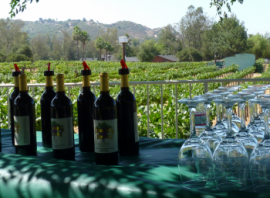 In 2010, Supervisors established a Tiered Winery Ordinance. A key component of it was creation of a Boutique Winery tier, which allowed for tasting rooms in conjunction with ongoing agricultural vineyard operations. Since its adoption, a number of issues have arisen that affect implementation of the ordinance. Planning & Development Services (PDS) held workshops on January 17, 2014 and July 1, 2015  to gather information and comments to utilize in formulating the proposed amendments to the Tiered Winery Ordinance. See our prior coverage of the July hearing here, when some wineries voiced alarm over proposals they feared could put some wineries out of business, while others voiced support for suggestions such as limiting food offerings and sharply restricting entertaining at smaller wineries.

One set of stakeholders whose voices have been largely ignored thus far have been consumers--the wine tasting public who may want to weigh in on whether they want to hear music at weekend wine tastings or be able to savor food along with wine when visiting local wineries.