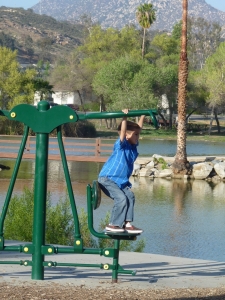 October 1, 2017 (Lakeside) –  Lakeside residents have raised concerns over sanitation at Lindo Lakes Park, where they said homeless people have urinated and defecated on walkways or steps in front of the restroom that until recently was locked at night.

Dennis Richardson calls Lindo Lake County Park “the jewel of San Diego County.”  Aware of the countywide Hepatitis A outbreak tied to poor sanitation among homeless populations, he became concerned—and started taking video in the park.  He says park rangers “told me to leave the area” and didn’t take his concerns seriously.

Richardson believed stains on sidewalks and near children’s play areas could be from human waste.  He says a park worker was power washing an area where homeless were known to defecate “without any disinfectant,” adding that disinfectant was on site, but not hooked up to the power washer, so power washing with water only might spread waste.  “Kids were walking through it, going down the slide, putting their hands on the slide, hands in mouths,” he told ECM.

ECM reached out to Supervisor Dianne Jacob’s staff, who forwarded our inquiry to Jessica Northrup in the County communications office. Northrop confirmed, “There have been no Hepatitis A cases related to Lindo Lakes Park” thus far, though the disease can have a long incubation period.

She said the county’s Parks and Recreation Department “takes Hepatitis A prevention very seriously” and is following the county’s disinfection guidelines for Hepatitis A to clean all facilities daily, including Lindo Lake Park.  As an added precaution, restrooms in four parks are now remaining open 24 hours a day, with security guards present near restrooms overnight.  Those four parks are Lindo Lake Park, Lamar Park, Spring Valley Park, and Goodland Acres Park.

As for cleaning protocols, Northrop says the County power washes areas in the park including hardscapes, playground and fitness equipment on a weekly, bi-weekly or monthly basis by park staff using a multi-step process. That includes spot treatment with an anti-viral sanitation solution, removal of solid wastes, cleaning with a pressure washer, and application of a bleach based spray to all surfaces as an added precaution against Hepatitis A.  Mr. Richardson may not have been present through this entire multi-step process,” she suggested.

County staff has met with Richardson and determined that stains of concern were dog waste and beverage stains. “There was no human waste found, she said, but added that daily monitoring and maintenance of the parks will continue.

To date, the Hepatitis outbreak has killed 17 people and sickened several hundred, with most cases severe enough to require hospitalization.

After media coverage on 10 News, Richardson posted on the Brush Fire Partyline on Facebook, which he founded, “Putting the park in the spotlight is only making Lindo Lake Park so much better.”

He encouraged visitors to come enjoy the park, adding that a list of concerns he’s filed regarding the park including trip hazards as well as sanitation concerns “are now being addressed by the park rangers.”