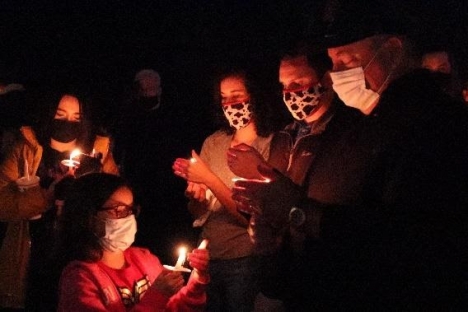 By Henri Migala and Rebecca Jefferis Williamson
Photos by Henri Migala
March 9, 2021 (Santee) – A solemn community vigil, attended by about 100 community members including current and former students, was held on the campus of Santana High School in Santee on March 5th to mark the 20th anniversary of a tragic day.
Twenty years ago, on March 5, 2001, 15-year-old Charles Andrew “Andy” Williams Jr., killed two students and wounded 13 others with his father’s Arminius HW-7 22-caliber revolver, on the campus of Santana High School.