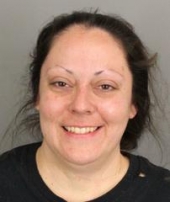 August 2, 2014 (Santee)—The San Diego Sheriff’s Department and the San Diego Regional Fugitive Task Force (FTF) have issued a “be on the lookout” request to the public for Jacquiline Francine Jackson. She is wanted on charges of assault with a deadly weapon at a home in Santee. A no-bail felony warrant has been issued for her arrest.

Jacquiline Francine Jackson is known to frequent San Diego's East County. Anyone with information on Jackson's whereabouts is urged to call the Crime Stoppers anonymous tip line at (888) 580-8477. You could be eligible for up to a $1,000 reward for information that leads to an arrest.