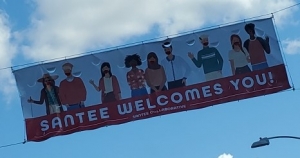 Source: Santee Collaborative
Photo: Rebecca Jefferis Williamson
January 13, 2021 (Santee) – The Santee Collaborative, a one-stop resource center for Santee students and families, has launched a new campaign to reflect and educate people about Santee’s changing demographics.
“The city is experiencing a positive change in demographics that make it a much more diverse community than in the past,” a press release from the Santee Collaborative states.
The student population for Santee School District reflects growing diversity with only 54% white, not Hispanic (CDE, Dataquest). The white population includes Middle Eastern families, and it is estimated that Middle Eastern students make up between 4-5% of the students in the school district. These are students whose first language is Arabic, Kurdish, Chaldean, Farsi, Hebrew, or Assyrian. There are 29 languages spoken by families who attend Santee School District from all over the world.  This makes Santee a very diverse community with students of different races, ethnicities and religions all living together.
“The Santee Collaborative has been working together to promote a healthy proactive community that builds resilient children and families for more than 20 years,” said Santee Collaborative Director Meredith Riffel. “As part of that mission to build resilience, we feel that we must explore and celebrate the diversity, equity and inclusion of all families in the community and promote equity in our institutions, policies and practices.
Two banners on Mission Gorge Road are a first step in developing a culture of understanding and support for this community. Riffel added, “We recognize that these conversations and actions may be difficult and challenging.  The Collaborative believes in a thoughtful and careful approach to supporting the diverse community of Santee.”
The efforts come at a time when Santee has made the news recently with several racially charged incidents including shoppers who wore a KKK hood and masks with Nazi swastikas into grocery stores, as well as clashes at protests in Santee at which some participants shouted racial slurs and engaged in violent altercations. But Santee has also seen some civic leaders denounce racism and thousands of racial justice supporters have marched through the city.
The Santee Collaborative’s campaign has four initial action steps: