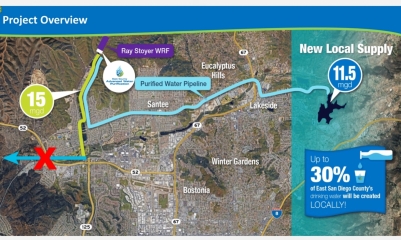 By Mike Allen
March 27, 2021 (Santee) -- Padre Dam Water District wants to keep everyone in the loop about its massive sewage reclamation project, especially the city where the project is located -- Santee.

At its March 24 virtual meeting, the Santee City Council approved a legal agreement to work collaboratively with the joint powers authority that is overseeing the nearly $700 million program called Advanced Water Purification.

Unlike so many other actions taken by the Santee Council, this one (called a memorandum of understanding or MOU), wasn’t required by the state Legislature in Sacramento. Instead, the idea was for the new oversight agency called the East County Advanced Water Purification Joint Powers Authority (JPA) to be proactive, providing the city with all the information about the project, and how it will unfold.
Alan Carlisle, Padre Dam Water District’s CEO, said even though state law gives JPAs special powers that exempt it from having to submit plans to cities, the new MOU will give Santee deep insight into all the aspects of the project, including full access to all plans and documents and the ability to weigh in on what the agency is doing.
“We wanted to enter an MOU to talk about the project. The MOU describes a way for the JPA to share plans and documents with the city. The city will provide review and comment on the plans, and will meet on a periodic basis,” Carlisle said. “There will be great communication between the city and the JPA on every aspect of this project.”
While Padre Dam is where the project is located and PDWD is the lead manager, the JPA consists of four agencies: PDWD, San Diego County, the city of El Cajon, the Helix Water District.
The reason for creating regional JPA is simple. It costs a whole lot to build and run a sewage reclamation plant, and PDWD realized early on it needed partners, Carlisle said.
He gave a rough estimate for the project at “north of $600 million.” In earlier reports, the agency revealed the total estimate, including design and engineering costs, to be at least $660 million.
The Advanced Water Purification project got going in 2014 and is similar to several other water reclamation projects in the state, including one being built by the city of San Diego called Pure Water.
The concept is simple but difficult for many to accept: Instead of dispensing of all our sewage into the Pacific Ocean as now done, send the effluent into a series of extensive treatment stages including reverse osmosis and advanced oxidation so that it is transformed to near-distilled quality.
Under the final stage of AWP treatment, the drinkable water will be pumped to Lake Jennings, where it will blend in with that natural water and undergo one more treatment cycle before being distributed to the various agencies and their customers.
All this is taking place because nearly all the water in Southern California comes from the Colorado River, a dwindling resource that has only steadily increased in cost in recent years. Creating a new water source will ensure the region has a sustainable water supply, and provide up to 30 percent of the area’s needs, according to the plan.
In fact, when the project is expected to be completed in 2026, it will treat about 16 million gallons daily, and have the capacity to expand to treat 18 million gallons daily (MGD). Because Californians have been aggressively conserving their water intake in recent years, this volume should be more than sufficient to handle the region’s needs even with an expected population surge, Carlisle said.
“We just don’t think we’re going to need the18 (MGD), I think 16 is going to do us for a very long time,” he said.
Mayor John Minto lauded PDWD and the foresight the district has demonstrated in its quest for water reliability. “With this project, plus all the conservation (residents are doing) we’re planning for the future, and not just 2026, but way out into the future, making sure we have a volume of sustainable water for our region.”
Carlisle noted the JPA has obtained $131 million in various grants and other incentives, as well as $101 million in low interest (about 2 percent) loans to pay for the AWP. He said next month the JPA will announce another $500 million in federal and state loans, also at interest rates well below market.
PDWD spokeswoman Melissa McChesney would not say whether the AWP program would increase bills for PDWD customers, who have been  paying some of the highest rates in the nation for years.
McChesney said the program “is expected to be cost competitive with imported water and will also help control wastewater costs locally.”
She added that initial results of a staff analysis show that the project is a smart investment. “Staff and the elected officials of each partner agency continue to proactively consider and analyze this information and continue to work hard to ensure the project is a cost-effective water supply option,” she said in an email.
Earlier this month, PDWD announced it will use a $1.15 million rebate it received from the County Water Authority for a reduction or elimination of an anticipated water rate increase next year. The district was unable to say whether the rebate would cover the entire anticipated increase in water costs next year, but should cover most of it.
The rebate was the result of about a decade of litigation between CWA and Los Angeles-based Metropolitan Water District over water charges to MWD’s 24 member agencies.
View the presentation here