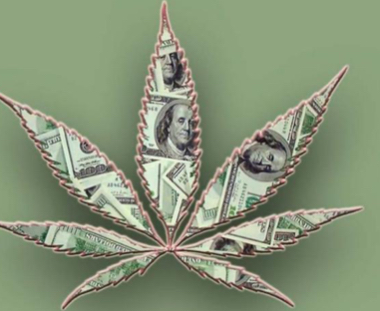 By Mike Allen
March 30, 2021 (Santee) - While other East County cities such as La Mesa and Lemon Grove tap into taxes that legalized marijuana shops generate, Santee has staunchly kept these enterprises illegal.
But that could change. At its most recent meeting, the Santee City Council announced a list of 11 priorities it wants to address in the next two years. At No. 11 was one to “consider economic development and regulatory options for cannabis businesses in the city, with a funding ordinance for the November 2022 election.”

Councilman Rob McNelis said he wants the City to consider a number of options to generate new streams of revenue to make up for an anticipated loss of funds the city expects because of a lack of new residential and commercial development.

McNelis said the passage of Measure N last November would “leave big holes in the City budget,” and that securing new revenue through marijuana businesses taxes could help to defray a big decline in taxes produced from new development.
Measure N, which passed by a 4 percent margin, requires that any new development within the city that increases residential density or intensifies land use over what is already permitted in the city’s General Plan must be approved by voters.
McNelis also wanted to get out in front of some rules being proposed by San Diego County covering cannabis businesses that “scare the heck out of me.”
He said among the provisions the County is considering is giving convicted felons priority in owning cannabis-based businesses, and requiring any business with at least 10 employees to unionize.
The county has been working on revising the rules covering cannabis growing and sales in the unincorporated area where currently five dispensaries operate. Under direction from the county Board of Supervisors, the new rules will have an equity focus, and give priority for permits to minority business owners who come from neighborhoods which have been affected by the war on drugs.
According to the county’s website, the program being developed “will allow individuals with past cannabis arrests and/or convictions, of low income, and of communities with high arrest rates or “Disproportionately Impacted Areas” to have greater opportunities for securing a County operating permit.”
The county board decided to delay adoption of the new rules for at least 90 days when it last met on the issue in early March.
The remainder of the Santee priority list found several that have been on the Council’s list for several years including continuing to reduce the city’s employee pension debt, improving the maintenance of the city’s roads, and working with the County to construct a new public safety center.

what is up with the old rcp site west of magnolia at the sd river? there was supposed to be houses there and a trail extension. nothing has been happening for a few months now.