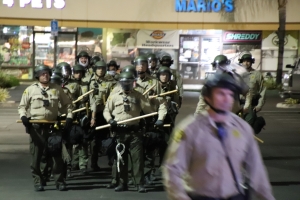 Photo, left by Henri Migala: Sheriff's officers cleared those on both sides of a contentious protest Monday night in Santee

June 5, 2020 (Santee) – Businesses in Santee including some major retailers and Wells Fargo Bank are boarded up or closed this afternoon, with a major law enforcement contingent in place after a post on social media called on marchers to “F*ck Klantee” tonight. Other posts suggest activist events may be planned over this weekend.

The posts follow several nights of conflicts and physical altercations between a group of white men who shouted racial taunts and  reportedly physically harmed several young people who claimed they were Black Lives Matter protesters, though the white men claimed they were detaining suspected looters.