July 25, 2020 (Santee) -- The Santee City Council voted to halt a moratorium on evictions of tenants who cannot pay their rent due to the coronavirus, citing the continuance of other financial back-up programs aimed at that purpose.

In a 4-1 vote at its July 22 meeting conducted via teleconference, the Council halted Santee’s moratorium effective July 31. The Council majority said a statewide moratorium on evictions of tenants remains in effect, and because the court system has not been operating, there aren’t any evictions happening anyway.

“As much as I hate to say this, I think we should rely on the state (to provide protections to tenants unable to pay their rent),” said Mayor John Minto. “We should give direction to staff to end this moratorium on a city level and allow it to proceed on the state level.”

Councilman Stephen Houlahan cast the sole no vote, and said the city should maintain the city’s eviction moratorium, a symbolic gesture of providing yet another safety net to local tenants who cannot pay their rent due to financial problems caused by the Covid-19 pandemic.

“I don’t want to rely on the state because so many people are falling through the cracks,” Houlahan said. “If there’s an additional safety net, it should be left there.”

Councilwoman Laura Koval said federal laws exist that prevent evictions due to nonpayment as a result of Covid-19 inflicted financial stress. She also noted that Santee received funds through the federal CARES Act that residents can seek if they are facing eviction.

The Santee Council recently approved an emergency rental assistance program and allocated $25,000 to it. The funds can provide monthly rental payments of $1,900 for up to three months to qualified low and moderate income city residents who can prove they’ve experienced a significant reduction in their income because of the pandemic. The program also provides mortgage assistance to qualified homeowners. An online application can be accessed on Santee’s website, cityofsanteeca.gov.

In other actions, the Santee Council awarded a $341,243 design-build construction contract to Western Audio Visual for an audio/visual system to its council chambers that will allow the meetings to be televised locally and live-streamed online via the city’s website. 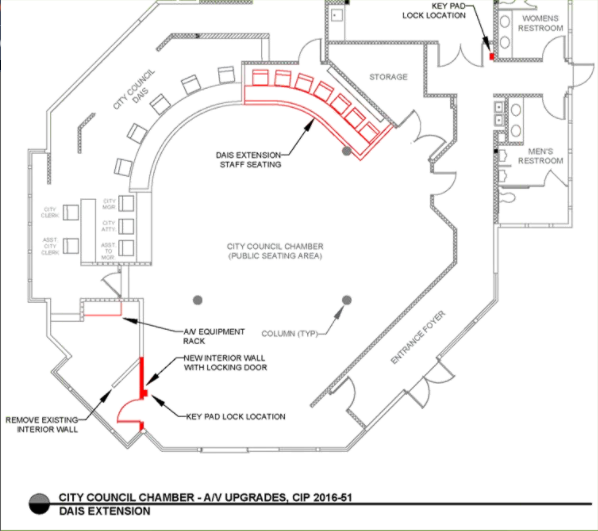 The renovations to the chambers include expanding the dais to allow for the seating of seven city staffers, new lighting, extensive upgrades to video and audio systems, and three 83-inch television monitors. Councilmembers have been talking of televising meetings for several years, but usually found more pressing spending needs from its constrained $46 million budget.

A city staff committee determined Western AV was the best bid among six received by the June 25 deadline. Funds for the project will come from the franchise fees paid to the city by Cox Cable and AT&T. Including all utilities, the city collected $3 million in franchise fees last year, and stands to collect about the same amount for the 2020-21 fiscal year.

City Clerk Annette Ortiz said the project should be completed by November, and the televised meetings could begin by December.