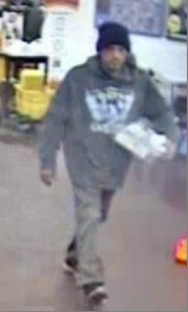 December 29, 2017 (Santee) - Investigators with the Santee Sheriff’s Station are asking for the public's help to locate a suspect wanted in connection with stealing a truck and identity theft.

Sometime between 11:00 p.m. on December 4th and 5:00 a.m. on December 5th, an unknown person (seen in the first photo) stole a white 1999 Ford F350 (seen in the second photo) that was parked at the Walgreens Pharmacy located at 9305 Mission Gorge Road in Santee.