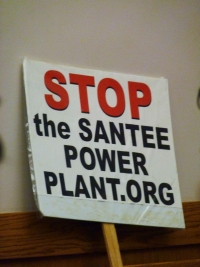 April 27, 2012 (Santee)—The San Diego Planning Commission voted 4-2 to grant a 60-day continuance to Quail Brush Genco (Cogentrix), delaying a decision on whether to rezone property near Mission Trails Regional Park as industrial space in order to allow construction of a gas-fired power plant.

Congressman and Mayoral candidate Bob Filner called the continuance request “a chance to propagandize" as the project developer seeks to allay widespread community opposition. Filner has said the power plant would “harm the surrounding air quality and degrade Mission Trails Park – plus, installing a gas-powered plant in an area ravaged by the 2003 wildfires makes little sense.”

A large crowd packed the hearing room, many with “Stop the Santee Power Plant” signs.  Filner noted that members of the public had taken time off work to show up.  “The citizens are here. I think you should allow them to speak,” Filner said, then suggested that the developer is “scared” of the people.

Quail Brush Project Manager Lori Ziebart testified that the company plans to “take this time to work on addressing the issues raised by the public” such as visual impact.

Van Collingsworth with Preserve Wild Santee spoke against the continuance.  In a post at SanteePatch, he called on Congressman Hunter to take a stance against the project also.

Thus far, however, Rep. Hunter has maintained a neutral stance, noting that siting of the facility is not a federal matter.  "Regardless,” he has stated, “I will continue to monitor the developments of this issue as it affects Santee, and should the matter extend to the federal level, I will keep your concerns firmly in mind."